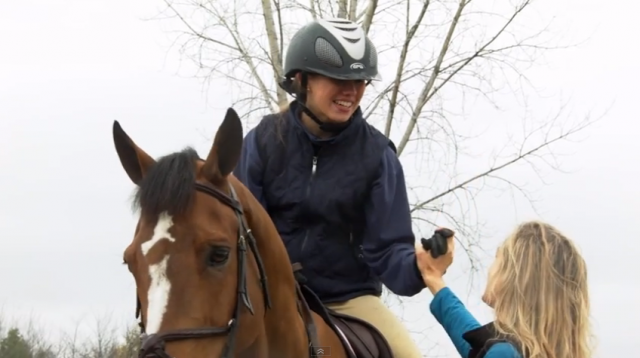 Two of Horse Nation’s fave books, Merwie Garzon’s “Blaze of Glory” and “Awesome Possum Pony Club” series, have a very big chance of coming to a screen near you.

Many, many moons ago… HN book critic Erin McCabe introduced me to a polo player named Jaden. He was “vampire hot,” she said in her review of Blaze of Glory by Merwie Garzon. After that information alone, I set out to read this book for myself. I didn’t sleep… I didn’t eat… I just READ. It was fantastic.

Afterwards, I contacted Erin and Merwie for an exclusive HN interview about the series. In that 2012 interview, Garzon teased the books had been optioned for a TV series and now (three very long years for Jaden fans later) it’s all happening, folks!

Let’s check out the trailer:

The casting has yet to be finalized for the TV series. The top contenders will be listed on the Equestrian Universe website where viewers will get to vote! All of which is pretty exciting. As equestrians we could vote for not only pretty faces, but people with actual horse riding skills! #amazing

But just in case one new equestrian series doesn’t fill up your TV queue, Merwie Garzon thought she’d write another book and have it optioned for TV too. This one is geared more for younger kids, but still packs plenty of emotional punch for fans of all ages. Read Erin’s review of Awesome Possum…

…then check out the trailer.

Director/Producer Antoni DiVerdis had this to say about making the trailers:

Ever since I can remember, I’ve always had a deep fascination for horses. To me, they represent the best that nature can offer and a true expression of how graceful a living creature can be. Their beauty, their power, their majestic presence and the sprightliness in their every move, all evoke poetry in motion that not even the best of poets can put into words. I am in awe of everything about them.

A few months back, I was asked to direct two TV trailers. One for a TV series entitled Blaze of Glory (based on the novel Blaze of Glory written by Merwie Garzon) and the other for a TV series entitled Awesome Possum Pony Club (based on the novel Awesome Possum written by Merwie Garzon with Kaida and Fen Garzon-Habacon). Needless to say, the moment I learned that both stories dealt with horses, I immediately accepted the job.

We began shooting at the end of October 2014. The three day shoot was hard work but not strenuous. Though it was cold and sometimes rainy, we did have sunny intervals that made the weather quite enjoyable to work in. The autumn colours were breathtaking and very conducive to the look and palette we wanted to capture on film. The Centre Equestre L’Integrité Stables was an ideal location with its various backdrops that served as made-to-measure sets. The proximity of every set facilitated our work. The cast and crew, including my executive producer Murray Shostak and my co- producer Irina Cazazaeva, worked hard and harmoniously to help create Mr. Shostak’s vision through my eyes as the director.

But for me, the icing on the cake was the two horses that we had the good fortune to use. Alex, a stallion of Canadian breed, starred as Panther in the Awesome Possum Pony Club trailer. Wyatt, a warmblood gelding, starred as Blaze in the Blaze of Glory trailer. Both were spectacular and high-spirited, each contributing a certain magic that makes the screen come alive. Though it was their first time in front of a film camera, they both followed directions and played their roles as if they were seasoned actors. I especially bonded with Alex (Panther) who would look right through me as if he knew me better than myself. It was love at first sight. I look forward to working with him once we start filming the Awesome Possum Pony Club series.