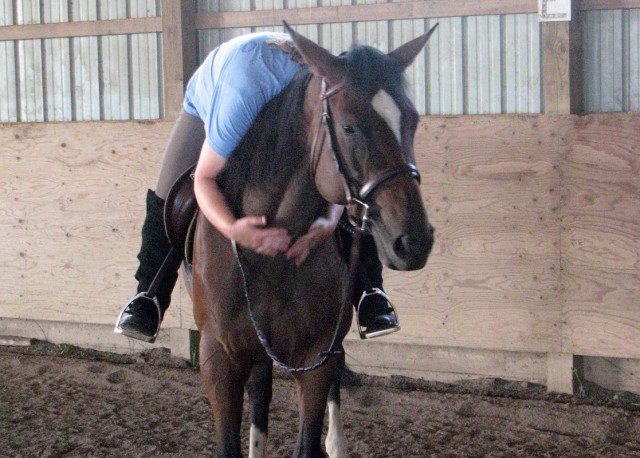 Horses have a way to find their way into our hearts at times when we least expect it.

In September of 2012 I lost my Thoroughbred mare to illness. I missed her terribly and swore I did not want to have to go through this ever again. The pain of my loss remained with me and even though I had done all that I could for her, I continued to doubt myself and if I could have done more.

In March of this year I came across a posting on the CANTER Ohio website and a bay OTTB mare caught my eye. She was pretty with a large white star on her head and two white stocking feet. It was not until May that I ended up contacting CANTER Ohio and just ask a few questions about her. I found out that she had suffered a slab fracture to both knees and that she was in a surgery lay up barn recovering from her ordeal. I thought why not send a little care package and through the course of our conversation found out she was only about 40 minutes from my house. Why not just drop the package off? I contacted several companies who offered me donations to take for the horses and finally on May 9th I made the short drive to meet Conga for the first time.

From the first  moment I laid eyes on her, I felt how special this mare was. She was even more beautiful in person than in the pictures and had a very sweet and laid back personality. I put the halter on her and led her out of her stall to brush her. As I stood next to her and talked to her caretaker, she put sniffed me and put her head on my shoulder, which was something my other mare always did. I felt a connection with Conga that was indescribable. I just knew I had to do what I could to bring her home.

Over the next weeks and months I researched slab fractures and read what I could find. I went out to visit her at least once a week and we spent time grooming, bathing, hand grazing and just enjoying each others company. Her knees and her potential future remained in question for some time until the vets declared her sound enough for occasional light riding only. I watched as she took her first steps under saddle again after rehab and she was stiff but remained comfortable enough that on September 1st I was able to adopt her and bring her home.

When we adopt/rescue these wonderful horses, I wonder sometimes who is really rescuing whom. I may have been able to give Conga a new home, but she gave me so much more in return. She has continued to get better as she is regaining her strength. I am glad that I found her and have learned that pain is the price we have to pay for loving something so much. Conga is now a part of the family and I could not imagine her not being there. She is truly special.