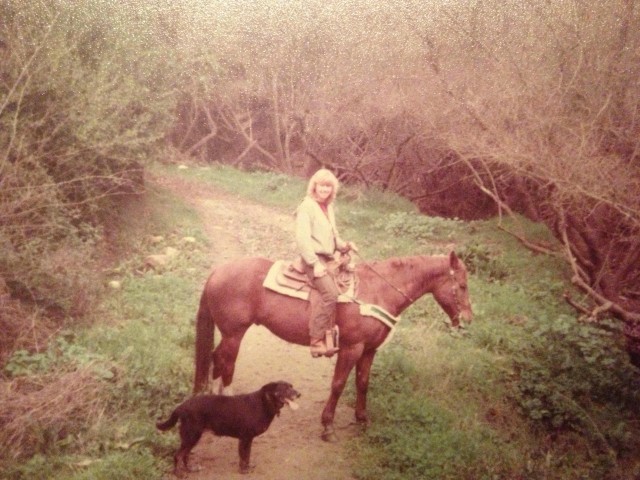 Sue Rice shares with us what it was like back in the day, running riot with her horse on the trails of suburban California.

Yes, you read correctly—“the trails of suburban California.” Those were—and are—a real thing in the verdant peninsula of Palos Verdes, California, where horses were once a common sight to see from your suburban half-acre of land, and kids disappeared for hours on their ponies with no helmets and no cell phones.

Sue Rice remembers those days. “We lived on our horses till the sun went down,” she says. She kept her first horse Swampy at the city-owned Palos Verdes Stable, which connected to trails throughout the peninsula. The most popular trail was just a stoplight away (which, naturally, had horse-height and human-height crosswalk buttons). They called it “riding the divider” down the grassy median of Palos Verde Drive North.

“I remember the first time trying my horse down the divider. I headed out by myself and my horse got about 100 yards away from the stable, spun around and galloped back. That’s when I realized he was really barn sour.”

She tried and tried to get him on the trail to no avail.

“My family always went out to dinner on Friday night. My father asked, ‘How’s the new horse?’ and I just burst into tears. So my dad quietly said, ‘Well, we’ll fix that.’”

“He went with me for probably the next two weeks and walked the horse by the reins. Every time he started to balk, he made the horse walk 10 more steps, then said, “That’s enough for today.” And we finally got the horse out to the bridle path and by then I kind of figured out what I needed to do.”

Sue on Little Lady with Mocha the trusty trail dog

Her father was not a “horse person,” but that common-sense training gave Sue the confidence to have all kinds of adventures with Swampy—from exploring the canyon trails to an illicit early-morning ride through Palos Verdes Estates to the beach—neither of which were places where horses were allowed.

“At the time I had Taffy the palomino and a very adventurous boyfriend,” she remembers. “To get to the beach, we had to go from our barn, to the canyon, past the PV stables, down the divider, through Malaga Cove Plaza with a big fountain in the middle, and down the surfer trail to the beach.”

The pair set off on their horses around 4:30 a.m., and they made it all the way through town to the beach, where they took off galloping and rode all the way to Redondo Beach where a lifeguard told them to get back where they came from.

The approximate path of their wild ride

Sue says she wouldn’t exactly advise anyone to do that today.

“We probably would have been arrested now, but basically then we just said, ‘OK, bye!’”

Though the trails of Palos Verdes and the PV Stables are still around, Sue eventually moved away. Now, her daughter has caught the riding bug. She started out with lessons at a fancy hunter/jumper barn, but when the opportunity to lease a trail horse came up, Sue found herself repeating history.

“When I started walking her, it was a flashback to my dad walking me and Swampy—not making a big deal, just quietly walking. Just there.”

The view from a canyon trail

There’s nothing quite like that first taste of four-legged freedom. Thanks for allowing us to share your story, Sue.