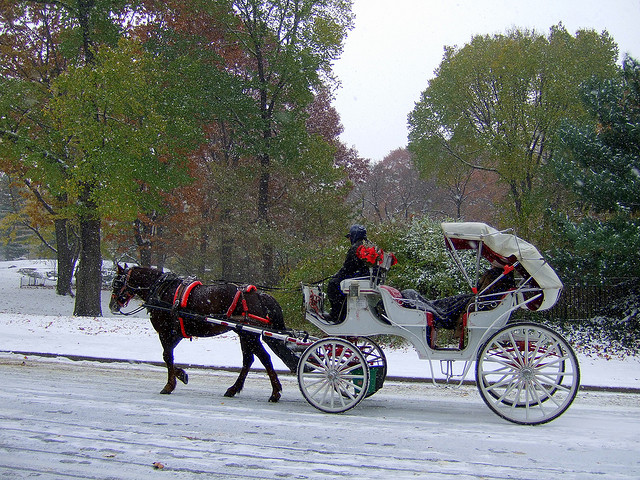 Fashionistas show their support for  carriage horses in NYC.

Though NYC mayor Bill deBlasio has made no secret of his plans to rid the city of carriage horses, the fashion community is taking the opposite stance–again. Thanks to the popularity of the event last year, the 2015 New York Fashion Week will pair up a designer with the famous New York carriage horses for a stroll down the city streets. For 2015, Viktor Luna, who won third place in season 9 of Project Runway, is the lucky designer.

The New York carriage horses will take the models out for an hour ride down New York City’s 59th Street this Wednesday at 1 pm.

Viktor Luna supports efforts to keep New York carriage horses in the city, and personally inspected the stables in Hell’s Kitchen to make sure the horses were well cared for. But he’s more of a horse admirer from afar.

“Pretty  much my theme is black, so any horse that has black or white,” he says in a New York Daily News interview, explaining how carriage horses will fit in with his fashion show.  “And they will be wearing harnesses and studs that they already have. I just want to make sure my collection is cohesive with the horses. I don’t know, I’m not picky. I like horses, so whatever they have.”

On the other hand, one of his models, clad in a very pointy black trenchcoat, grew up riding and had two horses as a child.

“Horses and fashion at the same time–you can’t beat that,” she said.

Last year animal rights demonstrators criticized  the event’s use of live horses, citing the danger of  rush hour traffic. However, Fashion Week organizers plan for the carriage ride to become an annual attraction.