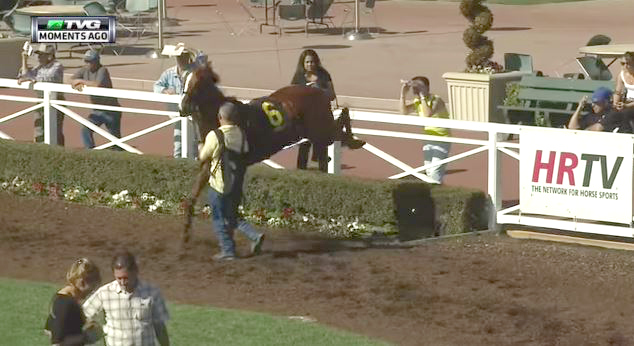 Odds are a mere 2-1 that the fan only bets on colts from here on out.

By no fault of the fan, things got a little crazy up in Santa Anita on Thursday when the 5-year-old mare Teasing Moment tried to land the kick of a lifetime. The railbird appeared to be inspecting horses on their way out for a race when the mare casually spun and sent her heels flying towards the face of a gentleman on the other side of the rail. A dirt clod from Teasing Moment’s foot made it appear much closer than it was, but it was still all a little close for comfort!

The mare was entered in Race 3 of the day at Santa Anita Race Track, a $40,000 Claiming Race, where unfortunately she ended up coming in dead last.

As a media outlet that boasts an absurdly awesome percentage of female readers, Teasing Moment, we’d all like to take a moment to say: We’ve Been There. We’ve all had that day, we’ve encountered that punk of a rail bird checking out our “fitness level,” and then gone out and run the crummiest race of our lives by going three wide in the backstretch and fading in the last furlong. You shake that one off. Horse Nation’s got your back, girlfriend!