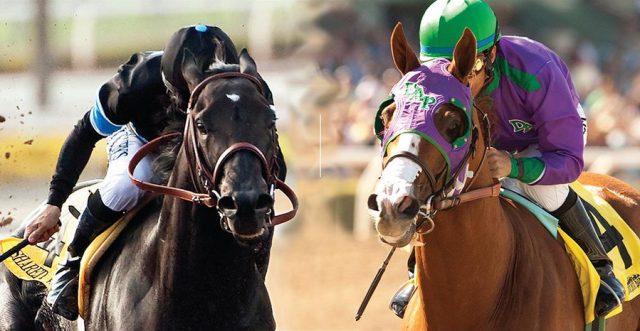 California Chrome faces off against rival Shared Belief on Saturday–but is the rematch enough to people excited about horse racing again?

Horse racing used to be one of the many brands of glue that held America together. If you don’t believe me, pick up a copy of one of my all-time favorite books Seabiscuit by Laura Hillenbrand. Throughout the thoroughly-researched biography, Hillenbrand points out how time stood still when Seabiscuit set foot on the track, or how entire towns essentially shut down when the horse came through via railcar–radio broadcasts of his races were followed literally all over the country and his famous match race with War Admiral was nearly a public holiday.

So what happened? When did horse racing, with all of its captivating high-speed drama, get pushed to the back burner of American sports? There are dozens of answers to this question, but one of the most glaring has to be that horse racing, for whatever reason, simply no longer resonates with the majority of American people. (And yet for some reason we can debate for weeks about deflated balls…or something. Don’t get me started.)

Now, it’s not all bad news–some of the big tracks are reporting record or near-record turnouts for some of the big days of racing, especially when there’s a superstar name like California Chrome to draw them in. There are still many, many devoted fans of horse racing out there. And by mid-April, there are suddenly a lot more horse racing fans out there. But if the favorite fails to win the Preakness, those numbers fall. And inevitably, in recent years at least, when the Derby and Preakness champion just can’t capture that third jewel, most of the those fans fade away again for another year. I’ve noticed the trend even here on Horse Nation–our Triple Crown coverage of California Chrome’s quest for glory was the talk of the town–for a few weeks. Recent pieces about his triumph on the turf in the Hollywood Cup and his huge coup in being named Horse of the Year barely seemed to get a passing glance.

So when I noticed that social media was starting to buzz over this weekend’s rematch between California Chrome and Shared Belief, I got curious. The last time this pair squared off was last fall’s controversial Breeders’ Cup Classic, where they finished third and fourth respectively after a rocky start that many felt altered the outcome of the race. Instantly my mind went back to the “original” famous match race, War Admiral and Seabiscuit, as well as other big-name matches in regular fields like Affirmed and Alydar. Could this be our generation’s great rivalry? Will this be a race that will get the general public hyped up about horse racing again?

I mean, I wish it were as easy as sharing this video on Facebook to get people excited again. It’s great that these races are being broadcast live on a major sports network. But I feel like getting the general public behind this actually-pretty-exciting story of two four-year-olds coming in hot for a rematch is not going to be as easy as putting together a snazzy commercial. It’s not like horse racing hasn’t evolved to the times–the Kentucky Derby pre-show has enough dramatic and sentimental backstories to get my heart pumping hours before the gates actually open, much in the style of Super Bowl Sunday featurettes. Horse racing has adapted to the social media spectrum as well–California Chrome has his own Twitter account, for heaven’s sake. And yet, somehow, there still seems to be a missing piece, something that’s preventing sports fans from connecting.

But until I can figure out what that is, there’s a race to be watched on Saturday. And maybe I’ll be alone on the edge of my seat (rooting for Chrome, let’s be honest–#chromie) but I’ll be there, drinking in every last dramatic drop all the way to the wire.

The excitement’s mounting. Who are you with? RT for #Chrome. FAV for #SharedBelief http://t.co/wZFfLwtwxS pic.twitter.com/1n4EeifTyJ

What do you think, Horse Nation? Is the picture really as bleak as I’ve painted it? Or is horse racing losing ground in a battle for the sports-watching public? Weigh in!