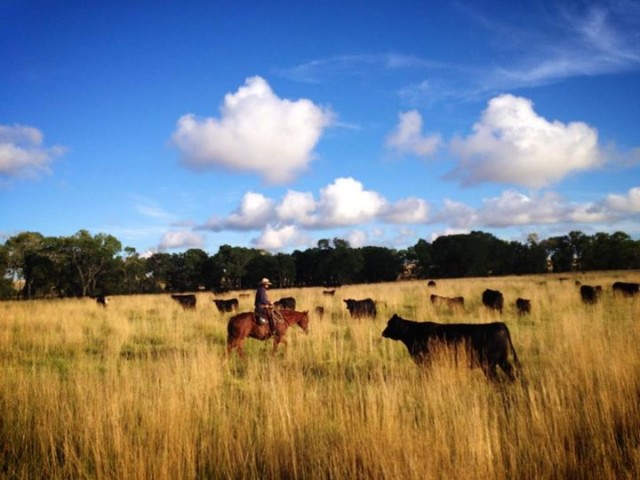 In Part I, we met Kathleen McConkey, who grew up and decided to be a cowgirl. In Part II, we get a closer look at Kathleen’s day-to-day life at Twodot Land and Livestock.

Catch up on the first half of Kathleen’s story, detailing how a New Jersey native became a Montana ranch hand, here.

So just how much does Kathleen ride at Twodot Land and Livestock? She describes her job as “getting to ride ponies and do science”: in reality, she plans grazing, moves cows, doctors cows, fixes and builds fence and helps with calving, branding, weaning, preconditioning and pregnancy checks. Because Twodot uses its cattle as a conservation tool rather than just as a commodity, her job duties also include biological monitoring, or measuring the land’s health to help plan future grazing decisions.

But a lot of that can be done from a truck or an ATV, right? Not really. Says Kathleen, “there are some things that are just better done ‘the old way’ and I think moving cows is one of them. We try to use horses for everything we can, though ATVs are notably easier and more efficient for fencing.  I hate using ATVs to move cattle though: they are bulky, loud, and not nearly as handy or effective as a horse.” It’s nice to know that there are still jobs out there requiring horsemanship in a day’s work.

Much of the riding comes into the daily monitoring and moving of cattle. Kathleen mentions that at two of her former employing ranches, the Chico Basin and Zapata, pastures were massive–as in thousands of acres. “We’d trot out early in the morning (sometimes trotting for a few miles), and then spread out and gather the pasture.  Often you wouldn’t see the folks you were working with for hours at a time, but eventually you’d all end up at the same corner, or gate, or water tank with all the cows.” At Twodot, things are marginally easier, though there is less help: “Our pastures are small (a few hundred acres), so moves aren’t nearly as much of a process, but we still do it horseback.  Moving 600 pairs with two people even just a mile can still be quite a task.”

Blooming iris at the Zapata Ranch.

Kathleen’s learning to rope (she describes herself as “functional at best”) and is lucky in that she’s not the only person on the ranch responsible for doctoring cows. Here, a few modern conveniences do make the job easier, such as a penning up a cow at a water tank or even using a dart gun in certain situations. While moving cattle in huge meadows doesn’t necessarily require intense cow horse skills, working with cattle in the corrals or at a branding can be an entirely different game, another facet of ranch life that to which Kathleen had to adjust: “that’s when I really got to learn what a ‘cowy horse was.” However, Kathleen had a few old tricks up her sleeve from her college years at Skidmore on the polo team: “It was just like polo ponies teaching me how to play polo— they catch you off guard by rolling back when the ball is hit back, before you even realize the play is going the other direction.  Just like how good cow horses could read what the cow was going to do before I had any idea, and almost leave me in the dust cutting it out.”

Out on the isolated ranch, it’s up to Kathleen and the rest of the small crew at Twodot to take care of their own horses (though they do have the town’s high school math teacher who doubles as farrier out every six weeks for shoes.) “We do any smaller doctoring procedure ourselves—cuts, punctures, muscle injuries.  We call a vet out if we think it’s really necessary or an emergency.  Once you are in charge of doctoring and care for a few hundred large bovines, you are pretty comfortable with any kind of injection, and you’ve seen and doctored many different kinds of big weird wounds or other ailments.”

If you’re picturing Kathleen riding off with hundreds of cows aboard a big rangy Quarter horse, change your mental image: her personal horse is a petite, fiery, oh-so-redheaded Arabian mare named Zuby. I asked Kathleen to tell me more about Zuby’s story–she was not the quintessential ranch horse and I was curious. “I bought Zuby the summer of 2013 when I was at the Zapata.  I missed riding fiery little Arabians.  We had a bunch of lovely, hard working, handy Quarter Horses at the Zapata…but I missed the Arabians big personality, endurance, and the canter that feels like their feet aren’t even touching the ground.” The Bitterroot Ranch in Wyoming, Kathleen’s first western working experience, bred its own Arabians for ranch use. Kathleen found Zuby, of all places, on Craigslist: “‘9 year old chestnut mare.  Ex Racehorse—winner.  No illness or injury, TONS of grit.’ She was obese and adorable.” She also hadn’t been ridden in two years, but that didn’t sway Kathleen.

“Our first goal was learning that I didn’t just want her to run when I was on her.  It took a while but we got a walk, a fast walk, but a walk.  Our two speeds were walk and run. Then after a while we got a trot too. She never tired, covered a ton of country with her trot, and turns out… she LOVED working cows. She’s got a very dominant personality, so there was never fear, just an immediate need to be bossy. I think she likes it for a similar reason I did—it gives her brain something to do.  Something to think about other than manically thinking about running.” Zuby is still a challenge for Kathleen, who plans to use this winter to go back to basics in the round pen and with longlines to help build up a topline and teach the mare to use herself. After that, Kathleen plans to start roping with her more.

Overall, the biggest change for Kathleen after an early equestrian life of riding in arenas was simply learning to ride outside: “I had been on trail rides before working on ranches, but I had never just ridden through miles and miles of open country.   It is one thing to navigate your way through a course of jumps or around a polo arena, but it’s a totally different thing to pick your way up or down steep hills, or over sketchy stream crossings—or to bring 20 cows a few miles back down a thickly timbered mountain during a blizzard. You become intimately familiar with the land you are riding in, and you really learn to trust your horse.”

We’ve all heard the phrase “chase your dreams” but no one’s illustrated just where that message can take you quite like Kathleen. For this Montana ranch hand who grew up in north Jersey’s urban sprawl, it’s just another day’s work.