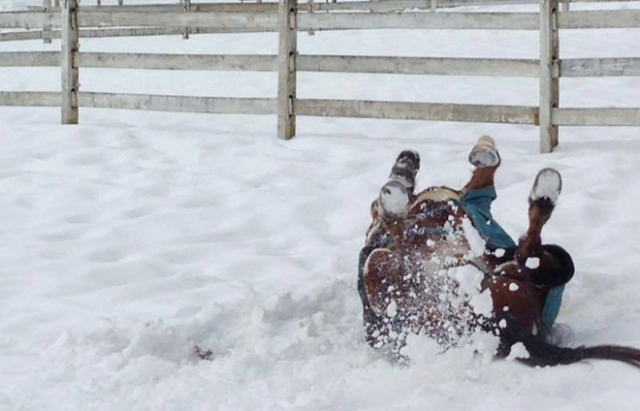 For this week’s 24-hour photo challenge, we wanted to see how your horses felt about six more weeks of winter. Turns out, they haven’t even noticed.

Maggie McGregor: “This is one of our boarders..Sam, he would rather be at the round bale than in the nice warm shelter with the other boys..blizzard or no blizzard!”

Missed the roll but what a snow face! #horsenation#morgans#snowdays

Lisa Goldie: “Our Horsey family lives in the Heart of the ‘City of Detroit, at the Buffalo Soldiers Heritage Association/Horse Stable. Day of the storm before the 13.7 inches of snow hit!”

Kelsey Nordengren: “I could have sworn I had a Bay, not an Appaloosa!”

Jaynie Burnett: “My Appaloosa, Grace, after a nice roll in the snow =]”

Bridget Donnelly: “Buster after using his face to dig for grass… Ponies!”

Bette Sumrell Mann: “Finn shaking off all the snow after a good roll”

Monique Anne Gaylor: “My PMU, Casper, making the most of his snowy turnout.”

Tiffany Coroka: “Colorado Kismet -aka- Panda clearly questioning whether i really wanted to go out in the snow!”

Keep an eye out for next week’s 24-hour photo challenge! Challenges are usually announced on Tuesdays with finalists shared by the end of the week.