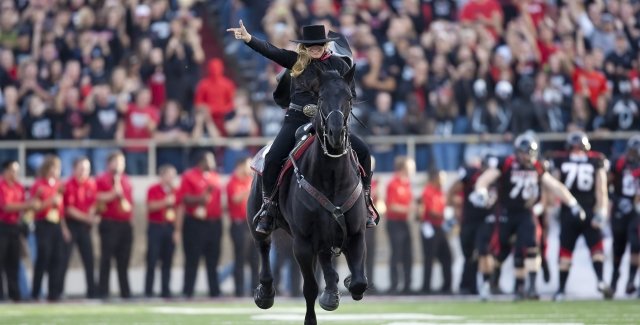 The cause of death was colic. Our hearts go out to Midnight Matador’s fans and caretakers.

Midnight Matador served for 11 years as the university mascot. Stephanie Rhode, Texas Tech’s Spirit Program director, told Texas Tech Today, “The entire Texas Tech Spirit Program mourns the passing of Midnight Matador,” she said. “He lived almost his entire life in service to our university inspiring hundreds of thousands of fans during his tenure as the Masked Rider horse. He devoted himself to our university with such loyalty, and he leaves a legacy that will be difficult for any horse to surpass.”

Midnight Matador was selected for the program at the age of 3. He retired in 2013 with full honors.

The Masked Riders program was listed by The Associated Press as one of the “Top 10 Coolest College Mascots.” The first masked rider, Joe Kirk Fulton, appeared in the 1954 Gator Bowl. The Masked Rider leads the football team before each home game as well as appears at most university sporting events, rodeos, parades, school activities and civic events around the state. It is estimated that each horse travels up to 100,000 miles fulfilling their duties.