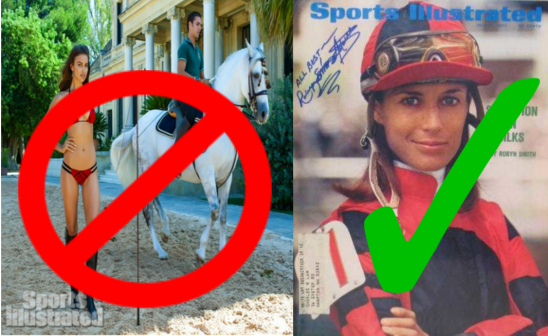 Featuring athletes from a wide range of sports, Sports Illustrated is a staple in locker rooms and doctor’s offices everywhere. Let’s take a look at a few horsey moments to be found in the popular magazine in this edition of “Nailed It or Failed It?”

Discovering an image of a horse competing (outside of racing) featured on a non-horsey magazine is like finding a needle in a haystack, but that’s exactly what happened in 1954. The magazine profiled the American Royal Horse Show held annually in Kansas City, Missouri. The first multi-breed event occurred in 1905 with the show expanding to include rodeo events in 1949.

Let’s all just agree the white horse “grinning” stole the show on this cover. The rest… I don’t even know what is going on. Why is the owner of the Yankees dressed like Napoleon?

This cover featuring Pamela Phillips at the National Horse Show is simply gorgeous. I was unable to nail down any information about Ms. Phillips, but discovered Richard Meek took the photograph. The National Horse Show first began in 1884 and is held annually in New York. The NHS is home to the Maclay Finals.

Oh, Sports Illustrated… bless your little heart. Nothing says equestrian quite like a half naked young woman in a red bikini. My 6-year-old daughter saw this picture and said, “Does she even know that boy?” That, ladies and gentleman, is a really good question.

Swimsuits and horses go together sort of like tuna fish and grape jelly, but Sports Illustrated just loves the concept. Maybe the editors are heavily invested in the chafe cream industry?

I don’t know how to sum up the greatness that was former jockey Robyn Smith. Abandoned by her biological father and born to a mentally unstable mother, Smith was raised in a foster home but later adopted. She became a jockey in 1969 and won the Paumonok Handicap in 1973. She was the first woman to win a major race in the USA. After retiring from racing in 1980, Smith married a little known actor called Fred Astaire.

While we’re on the subject of girl power, let’s talk Silver Spoon. The daughter of Citation, Silver Spoon held a six-race winning streak leading up to the 1959 Kentucky Derby. She was the only filly to enter the race between 1945 and 1980, finishing a respectable fifth, and one of only two fillies to win both the Santa Anita Oaks and the Santa Anita Derby. The press hailed her as “the best filly since the war.”