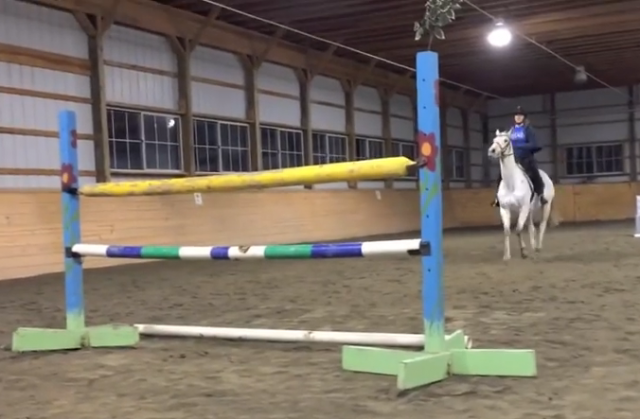 This is quite possibly the best horse-for-lease video in history.

You know how it goes with barn girls. Somebody starts cutting up, and then somebody else starts riffing on it, and then things get out of hand and keep snowballing until you’ve made a music video that’s going viral on YouTube.

OK, OK… so that last part doesn’t usually happen, but it did for Kristin Taylor. She and her barnmates at Black Fox Farm in Pennington, New Jersey, were out riding when she started mixing up the lyrics to Meghan Trainor’s chart-topping pop song “All About That Bass,” changing “Bass” to the name of her horse, “Bert.”

“I just started singing it and it turned into this huge thing,” Kristin says. Coming up with new lyrics became a running joke and finally they decided to turn it into a video, since Kristin was hoping to partial lease Bert and needed to put one together anyway. “We just thought, we should do this and it would be fun and maybe people would like it. I never expected to blow up the way that it has.”

Their video has since gotten over 14,000 views on YouTube, and although nobody has yet stepped up to the plate to lease Bert, Kristin is hopeful.

All about that Bert:

Cat Turned Blue aka Silver, a.k.a. Bert aka All About That Bert, is a 15.1 OTTB. Free jumps 5′ currently and clearing 3’6″ courses consistently. Working up to 4’3″ under saddle. For partial lease in Pennington NJ to an intermediate to experienced rider looking to do eventing, dressage or jumpers (he does have dressage training, but his owner mainly does jumpers with him as you can see in the video). Contact Kristin Taylor (609)273-4826.

Many thanks to Kristin and her barnmate Angela Roberts for sharing.