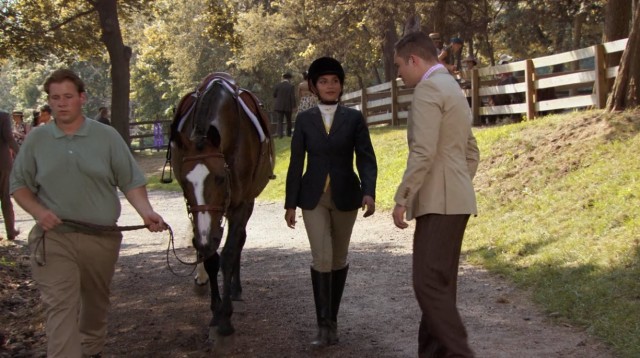 In which my guiltiest binge-watching pleasure collides headlong with my equestrian lifestyle. You don’t even have to be a fan to appreciate what happens next.

For the tiny percentage of Horse Nation that secretly, with me, absolutely loves the teen drama Gossip Girl, this one’s for you.

If you’re not familiar with Gossip Girl, here’s everything you need to know about the series that concluded in 2012: The characters are all ridiculously rich, ridiculously good-looking and get into ridiculous situations thanks to their beauty and wealth set in Manhattan’s Upper East Side. Really, it was only a matter of time before the writers realized that it only made sense to throw these characters into the equestrian world to dabble for 45 minutes in elite A-circuit society, and they finally did so in the last season. In the typical fashion of pop TV, there are moments of brilliance… and moments of failure. Let’s tally ’em up.

Quick and dirty synopsis: Chuck (Ed Westwick’s dark and brooding young real estate mogul) is trying to track down details of his father Bart’s suspected illegal international dealings. His on-again off-again girlfriend Blair (Leighton Meester as the queen bee of fashion) is helping him by tracing the mysterious Lady Alexander…who turns out to be a horse:

Chuck: Assuming that Lady Alexander isn’t related to Mr. Ed, it appears we’ve hit another dead end.
Blair: Well not exactly. Thoroughbred registries have all the important info on every sale, such as…prices and previous owners. It’s like MLS for horses.
C: So find a horse, find the owner.
(Blair types on her phone, presumably searching an online database.)
B: Here she is. Lady Alexander. Says she was bought four years ago by Bartholomew Bass.
C: What else does it say?
B: Well not much, except that she was  just under a million dollars.
C: Is that a lot of money?
B: For regular people, yes.
C: I meant for a horse.

Yes, these Thoroughbred registries do exist–just one, actually, called the Jockey Club, and to access those kinds of records you need an online account. Does Blair have such an account? Possibly, but probably not. Other websites, like Blood-Horse, keep a more public profile for each horse actively racing, but it lists auction sales only and doesn’t seem to list illicit secret horse dealings among business magnates.

B: There is a big three-day horse show going on just outside the city right now! I saw it on one of the registries. It attracts an elite international crowd. Maybe if the Sheikh isn’t there himself, he has people there for him?
C: Looks like we’re back in the saddle.

Blood-Horse online does not list international horse shows, as an aside. Also, big points off for Chuck’s terrible attempt at a horse joke. Also…yeah, the equestrian community is relatively small compared to others, but just because your dad bought a Thoroughbred from a guy doesn’t mean that that guy will happen to be at an international horse show just hanging out as well.

Blair and Chuck somehow pick up Chuck’s stepmother Lily, who proclaims her love for Stone Orchard Stables: “It’s been in the same family for two centuries!” (Surprise: It’s not a real place. But the Google auto-fill shows that an awful lot of people were hoping that it was. Sorry, folks.) They arrive at the stable together, where equestrians and their horses are doing equestrian things (although mysteriously, no one is wearing any back numbers). It’s one of those shows where people drink champagne and wear silly hats:

Also, for an international elite show, I’d expect a little more than a couple of fences sitting out in a field. But hey, maybe this is an elite international show for the rest of us.

Blair ditches Lily by tricking her into thinking someone was waving at her across the way, turning Chuck loose to discover that the Sheikh’s daughter is showing her horse Crown Jewel. But Lily returns a moment later with the news that the woman waving at her was in fact her old acquaintance Princess Anne with her daughter Zara. Props here to the Gossip Girl writers for doing their research that Zara Phillips is, in fact, an equestrian, although we appear to be at a hunter/jumper show and it’s unclear why Zara would travel to the U.S. to hang out there. We’ll give you half a point.

Lily starts Chuck and Blair out on a tour of the grounds, and then runs into her old friend Jessica Springsteen, who is apparently not riding today but hanging out in a white suit dress. (Bold move for the barn, Jessica.) Another point for the writers for dropping more society equestrians into the mix.

Chuck manages to find the Sheikh’s daughter Iman as she leaves the show ring. She hands off her horse Crown Jewel to a waiting groom, who tragically fails to run up the stirrups, and also does not know that the rest of the world leads horses from the left. But maybe Crown Jewel likes it that way.

Later, after Bart comes in to ruin everything, Blair corners Iman for one last chance to figure out what happened to Lady Alexander. I’m not a fan of Iman’s hair net technique (the net-clip died a long time ago in the show ring, girl) though it does leave her hair and face looking flawless for prime time TV and ultimately I’m sure that’s what’s important.

Ultimately, Chuck deduces that Bart’s purchase of Iman’s old Lady Alexander must be a cover-up for something illegal and everyone heads back home to the city to change outfits yet again. Mercifully, there are no more bad horse jokes, and horses are never again mentioned in the series.

Overall, the episode is not a failure. We’ll give this one three stars–plus points for name-dropping actual “elite” equestrians, minus points for a questionable premise, Chuck’s terrible one-liner and Blair’s pants.