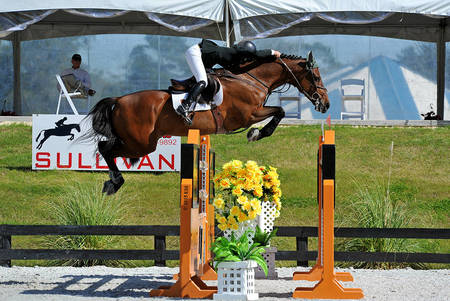 From a USEF Network press release:

Kaitlin Campbell and her Rocky W jumped to victory in 38.220 seconds in a nine horse jump-off in the $25,000 SmartPak Grand Prix in the Ocala Horse Properties Stadium on Thursday.

Campbell, of Georgetown, Kentucky, went second-to-last in the jump-off. Only two riders had jumped clear to that point. Campbell and her Holsteiner/Dutch Warmblood cross, fondly known as Rocky, finished clean to collect the winning check for $7,500.

“I’ve had Rocky nine years now. We actually bought him in Ocala in 2006 and this is our first time back. He obviously likes it here,” said Campbell, 23, who works as a trainer at Marigot Bay Farm in Lexington, Kentucky, and aims to jump Rocky in the Great American $1 Million at HITS Post Time Farm on March 23. “He’s 17-years-old now – I really want to jump in a big class with him.”

Wannick WH, owned by Candy Tribble and Windsor Show Stable, and ridden by Christine McCrea of East Windsor, Connecticut, posted the first clear round of the jump-off. Their time of 40.598 held the lead until Campbell rode, putting them in second place to earn $5,500.

Third place went to the only other clear jump-off round, posted by Dorothy Douglas of Flower Mound, Texas, on S&L Farms’ S&L Elite with a time of 40.635, over the course designed by Danny Foster of Ontario, Canada.

Mary Goldman’s Centurion B, ridden by Lisa Goldman of Hawthorn Woods, Illinois, had the fastest time of 36.542 in the jump-off but failed to clear a rail at Fence 11, dropping them to fourth place. HH Dauphin, owned by Woodrun and ridden by Laura Linback of Mundelein, Illinois, finished with four faults and a time of 40.660 to take fifth place.