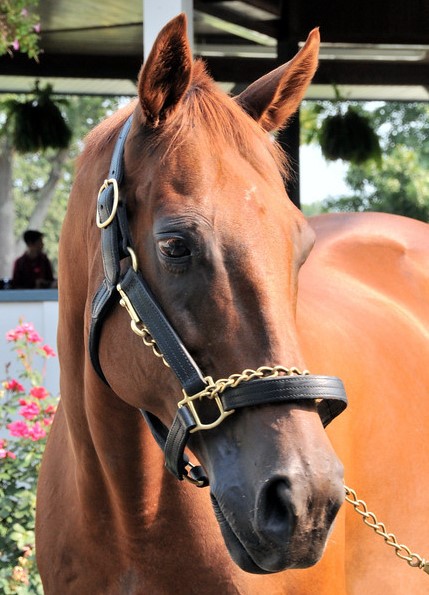 This month, we catch up with racing great Funny Cide.

Ever wondered what some of our favorite horses are up to now? Our new series, presented by Merial, catches up with fan-favorite horses in their retirement. First up, Funny Cide!

Funny Cide stole America’s hearts during the 2003 Triple Crown season, charming his fans with his quirky personality and unassuming presence. While many others were focused on Empire Maker that year, it was Funny Cide who earned the title of “America’s Horse” in 2003.

Not that he wasn’t fully deserving of the title, as he took home victories in the Kentucky Derby and the Preakness that year, putting history on the edge of making, once again.

Funny clocked the tenth fastest time (2:01.19) in the Derby, winning by 1 3/4 lengths. Two weeks later, he bested the field in the Preakness States, winning by the second-largest margin in history. The Triple Crown wasn’t meant to be, however, as Funny Cide was beaten by Empire Maker and Ten Most Wanted in the Belmont.

After the Triple Crown, Funny Cide battled respiratory problems and suffered some lackluster results. A gelding, his time in the breeding shed was not to be, so in 2006 his connections decided to attempt a comeback. He made his way back to the graded races that year, and was officially retired in 2007.

Wes Lanter spent much of his career caring for Thoroughbreds, mainly in the stallion barn. He caught the horse bug while working at the Kentucky Thoroughbred Center in the 1980s, and found his niche working as a groom for farms such as Spendthrift and Three Chimneys before taking a stallion manager position with Three Chimneys in 1991. He later went on to work for Overbrook farm until 2009.

Wes had previously worked at the Kentucky Horse Park, caring for greats such as John Henry and Forgo, but he decided to spend more time with the stallions. When the time came for him to look for a new change in his career, the opportunity arose to take the Equine Operations Manager position at the Horse Park. In returning to the storied park in Lexington, he met Funny Cide.

Funny Cide came to reside at the Horse Park in 2008. “They’d tried him as a track pony before, but he just wasn’t really the right type,” Wes said. “Usually you want the pony to calm the horses down, not amp them up. So they decided that it’d be best for him to be somewhere his fans could come and get up close and personal with him.”

Up close and personal, indeed, as Funny Cide spends his days lounging in the paddock at the Horse Park and parading for his throngs of fans who come to meet him. He’s even got several fans who travel to see him regularly, and one who has included him in her passing wishes.

“We have three shows scheduled each day for the Hall of Champions,” Wes said. “I try not to push them to do all three, but Funny handles it and poses for all his fans. He’ll go out in his turnout and relax, and he knows when to pose and charm the crowd.

“There’s a lot of fans still. You can count on every year they’re going to come and see him. A big highlight for me was taking him to Saratoga in 2012 and parading him there. He’s got so many fans from New York; it was an incredible experience to see how many people truly love him.”

Funny Cide is content to spend his days at the Horse Park, grazing to his heart’s content and interacting with his adoring fans. Life in Kentucky is truly a well-deserved retirement for a horse who embodies the true racing spirit so much. From overnight stardom to a full-on comeback, and everything in between, Funny Cide will always be one of America’s horses, and he’s enjoying his time at the Horse Park, under the ever watchful eye of Wes Lanter.