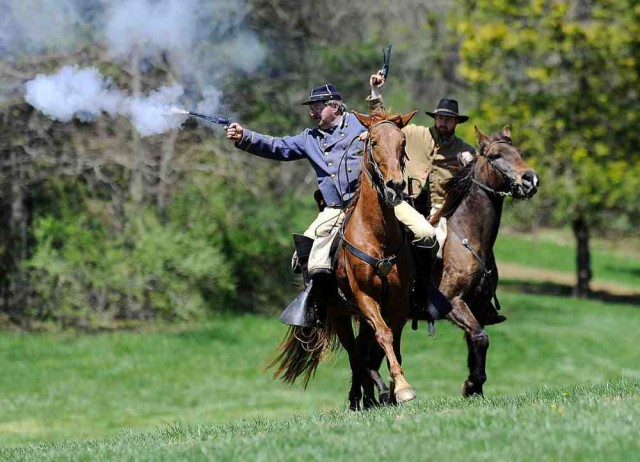 The Shipleys work hard to play hard, all while honoring history as mounted reenactors.

All photos courtesy of Ruth Shipley

The peal of a bugle, and the bark of a Commander. Gunsmoke and cannon fire cloud the air. Horses and soldiers gallop into battle with a rebel yell…

…Just part of a normal weekend for Ruth Shipley and her husband Garrett, who are living their dream riding and training horses for mounted reenactments with the 1st Maryland Cavalry Battalion, a Civil War reenactor’s group.

“My mom swears I neighed before I spoke,” she laughs.

But as a young adult, Ruth joined the army and took every opportunity to continue riding through leases and borrowing horses. After a few years, the time was right for her to follow her lifelong dream—so she moved from New York to Gettysburg, Pennsylvania, a Civil War reenactor’s paradise.

It’s taken a lot of horses and a lot of training to come to the three gaited horses she uses now for reenactments. (Those smooth gaits make a long day in the saddle much more comfortable!)

“Since I’ve been doing this, I’ve found that not every horse can be gun-broke,” says Ruth. She’s always on the hunt for horses with good temperaments, and brings a pistol with blanks along whenever she goes to try a new prospect. Once they arrive at her family farm, new horses undergo a gradual desensitization process, as well as lots of conditioning out on the trail.

James McGlincy and Garrett Shipley on their Tennessee Walkers

“We start gun-breaking with feeding in the morning. My husband will have a .22 pistol loaded up, and he shoots the pistol from 20 feet away. They may be startled at first and want to look up, but then their morning feed is right there as a positive reinforcement. Over time, he’s able to shoot closer and closer without a reaction.”

As for riding, cavalry horses must learn to keep in formation. Generally, this means rows of four horses, but depending on the terrain, sometimes cavalry riders ride in twos or expand out in a line to charge.

Historically-accurate tack includes McClellan saddles, Hope saddles and flat leather halters under the bridle so that one rider can hold the horses while others dismount to fight. During the Civil War, long-shanked curb bits were the norm, but today reenactors tend to use softer bits. Neck-reining is a crucial skill for them to learn so the rider can hold a flag or shoot a gun while in battle.

The most surprising thing about her new life?

“It’s just like the real army, except for on horses. There’s a lot of people yelling at you to get in formation, and a LOT of ‘hurry up and wait.’”

Much like the battlefield, only a small portion of time is spent fighting, and part of the appeal of reenacting is time spent camping with other families. One person in camp may be the “wrangler” or stable hand, another the cook, and certain members of the battalion have special positions they were nominated or elected for such as Commander, Captain and Corporal. In total, about 30 people are involved in the 1st Maryland, and everyone has his or her role.

Even when “her” role is one you might think of as “his.”

“There were a lot of women who fought in the Confederate army, and a few in the Union,” explains Ruth, “There was even a woman found who died at Gettysburg next to her husband. If you look at some of the pictures of how young the people were in the cavalry, you can see how a girl could pass as a young boy.”

If you’ve got a passion for history, the 1st Maryland Cavalry Battalion holds a drill day on the third Saturday in March for anyone who wants to try mounted or unmounted reenacting at the Union Mill Homestead.

Thanks to Ruth Shipley for sharing your story with us!