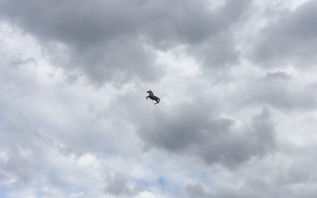 I always suspected my horse came from another planet…

Did your horse act particularly strange on Friday? Well, it may have been due to secret telepathic communications from the Great Space Horse who came down to inspect the Colima volcano in Jalisco, Mexico.

This video from the UK’s Daily Mirror shows the volcano erupting and photos of the odd black formation showing up to the left of it, as well as footage of a white formation that appeared near the volcano last November.

Volcanoes are often the site of suspected alien activity, and the Colima volcano is a very active one which has been experiencing a string of eruptions since November 2014, with two eruptions this January. The Colima volcano has also caused several temporary evacuations in the past decade.

Alien enthusiasts have theorized about what the UFO might be. Loyola Quintanilla Rosas, who saw the black object, said, “It had a very large body and seemed to be an animal…But the legs weren’t moving so it clearly wasn’t a modern-day Pegasus.”

Of course. That would be ridiculous. My bet is that horses around the world are actually using their herd instinct to tune into an Equine Intranet where they await instructions from space. Their influence on the human race has dwindled as technology advanced, but now it’s all about quality, rather than quantity, as they target populations for equine domination.

A spokesman from Mexico’s Civil Protection of the Ministry of Interior said, “It is most likely a drone of some sort.”