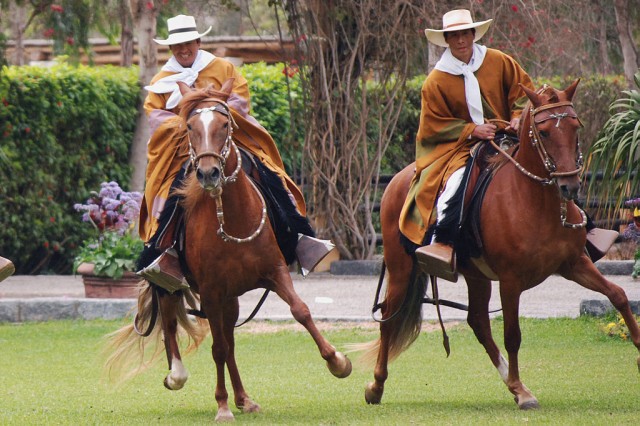 They’re both gaited, they’re both descended from Spanish stock, and they’re both said to be totally awesome. But yes, there’s a vast difference between the breeds.

This article was originally published on January 27, 2015.

The more research I do into horse breeds originating in the Americas, the more I realize how much the western horse world owes to those Spanish conquistadors. (Yes, I am aware they did many terrible things as well–but the horses, people! Think of the horses!) The mustang, the Quarter horse, many gaited breeds, working cow horse and western riding in the general: we have the Spanish to thank for all of these iconic pieces of this nation’s horse culture–not the least of which are the Paso Fino and Peruvian Paso.

Their names are deceptively similar, and for some of us in the non-gaited horse world, tragically confused more often than not. In our defense, the two breeds stem to the same group of horses brought over to the Americas by the Spanish conquistadors who were typically mounted on Andalusians, Barbs and the now-extinct Jennet. This last breed of horse is perhaps the most important part of the Peruvian Paso/Paso Fino bloodline, as the Jennet was known for its unique  four-beat ambling gait. As the Spanish spread across the South and North American continents, they brought their horses with them, breeding more stock from the original imported horses. The conquistador’s horse was bred for stamina, beauty and most importantly the all-day-riding smooth gait.

And here is where history divides the breeds: the horses who traveled west across South America to Peru stayed isolated in that coastal country, caught between the Pacific and the Andes. Among the Caribbean and Latin American countries, another variety of the conquistador horse remained, especially in Puerto Rico and Colombia. Both groups of horses retained their smooth gaits, though they developed into vastly different expressions.

While each breed has its own names for the various speeds of the gait, the essence of the gait at all speeds and between both breeds is actually the same: a four-beat ambling lateral gait that is very smooth to ride. It’s the way that the two breeds go about executing the gait that shows distinction between the Paso Fino and Peruvian horse–and as usual in the equine world, the distinctions stem back to the theory of form to function.

Developed for being a smooth-riding horse around the Spanish colonies of the Caribbean and Latin America, the Paso Fino gaits developed into smooth and quick-moving strides while maintaining the distinct four beats. Meanwhile, down in Peru, the Peruvian Paso was being bred specifically to cover long distances on mountain trails, creating a smooth-riding horse with a big, ground-covering stride (this breed also developed termino, or the outward swing of the front legs.) Unfortunately, no one on the internet seems to have filmed a video yet of these two horses moving side by side, so we’ll have to just look at some videos and compare ourselves:

The longer I watch these videos, the more I understand why fans of both breeds don’t want the horses to be confused as the other–yeah, the gait might technically by the same, but it’s like watching a cow horse jog and a hunter trot and mistaking them for the same thing.