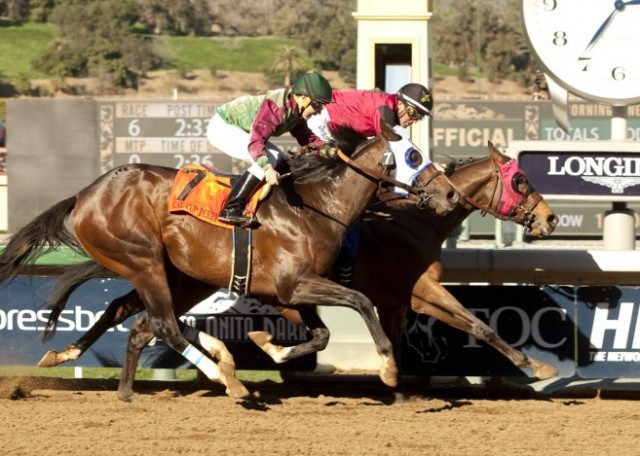 Yeah, Tough Sunday may been a spectacular loser in Saturday’s California Cup Derby, but considering he was born blind and deaf he’s really doing alright.

The No. 1 and 2 finishers in Saturday’s Cal Cup Derby, Mischief Clem and Pulmarack. Tough Sunday finished a bit further back in the field but we’re declaring him a winner nonetheless. Photo courtesy of Santa Anita.

Three-year-old colt Tough Sunday might just be the toughest, most courageous racehorse that ever stepped foot on the track. Nope, he’s not bred to be royalty, he doesn’t have the best speed index of his generation, and he doesn’t have that tenacious kick-from-behind running style that will rocket him to this year’s Triple Crown. But when you consider that it’s a miracle that this colt is even alive, let alone running races, Tough Sunday has earned his name. He was born blind and deaf, and though his vision was restored, he still can’t hear.

Tough Sunday’s entry to this world was rough: his umbilical cord was severed during his long delivery, so when he was born he had been without oxygen for a dangerously long time. He was immediately taken to a nearby clinic, where his prognosis looked bleak: the colt was blind, deaf, had no nursing instinct and a heart murmur. Without a nursing instinct, Tough Sunday was abandoned by his dam. His owner and breeder Nick Alexander was told to make a tough decision around day five whether or not to continue trying to save this most disadvantaged foal–but when Alexander went to visit the colt a day later, he noticed the horse’s eyes following him, signaling that his vision was amazingly repairing itself.

The colt’s dam Sunday Dress eventually accepted her colt, but he never learned to nurse. He returned home to be pail-fed and after another month of recuperation was able to be turned out with the other colts and mares at his home farm. If the story ended here, we’d all be happy: it was a triumph simply for Tough Sunday to come home. But he didn’t stop there–the colt trained and then raced, breaking his maiden on December 28, 2014 in his third career start (his previous performances placed him third and then second). Tough Sunday was then pointed toward this past Saturday’s $250,000 California Cup Derby at Santa Anita, over 1 1/16 miles.

A second career victory wasn’t in the cards for Tough Sunday this past weekend, however–watch the race replay and you can see Tough Sunday (from post position 1)  just dragging jockey Tyler Baze early in the race and then fading quickly. But this colt’s career is far from over, and his growing fan base remains optimistic that the horse who’s already overcome so much has plenty left to give.