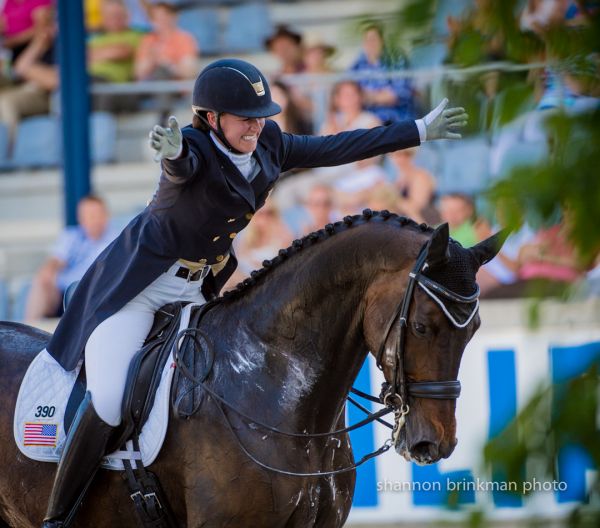 A tremendous partnership on the world stage comes to an abrupt but respectful end.

Adrienne Lyle announced yesterday that she is retiring her London Olympic games partner, Wizard, after he sustained a suspensory injury over the winter. According to PSdressage.com, they believe the injury occurred while Wizard was enjoying his daily turnout, and while they had hoped to rehab him in time to make one final showing at the Reem Acra World Cup in Las Vegas in April, Lyle and Wizard’s owner Peggy Thomas decided not to push him for more when he had already done so much in his career.

Unquestionably though, Adrienne and Wizard’s career highlights together were competing as individuals at the 2012 Olympic Summer Games in London, and on the 4th place team for the 2014 Alltech World Equestrian Games in Normandy.

Wizard enjoys being turned out and goes in turnout daily. One day this winter after coming in to be ridden, he just didn’t feel right. After having our vet here in Florida evaluate him, it looks to be a strain in a suspensory.

Everyone involved in Wizard’s life wants his health and happiness to be our number one priority. The Thomas family, Debbie McDonald and I made a decision that we would not push Wizard’s rehab to be ready to try for the World Cup Final this year. Given Wizard’s age, we have made the decision to get him happy and comfortable and give him the retirement he deserves.

My partnership with Wizard began in 2007, when I came to Debbie McDonald as a working student and was given the ride on Wizard shortly thereafter. As everybody knows, it takes an amazing team to get a horse and rider to the top level of our sport, and I have had the most incredible team you could think of!

For the past eight years, I have had the amazing support of the Thomas family, who allowed me to ride Wizard and compete him around the country and around the world. I have had Debbie McDonald’s incredible coaching every step of the way as well as Bob McDonald running the farm and handling the logistics of Wizard’s jet-setting life. Wizard took me around the world to places I never thought I’d get to be.

I am eternally grateful to all of those involved in Wizard’s career for allowing me to have this amazing journey with him. He will return with me to the Thomases’ River Grove Farm in Idaho and join Brentina in her retirement there.

It’s never easy to end a partnership that you know may have been a once-in-a-lifetime ride and allow your horse a long, healthy, and meaningful retirement, but we never tire of seeing top international athletes give exactly that to their longtime partners. Horse Nation sends its congratulations to Wizard on an extraordinary career and an even better retirement.