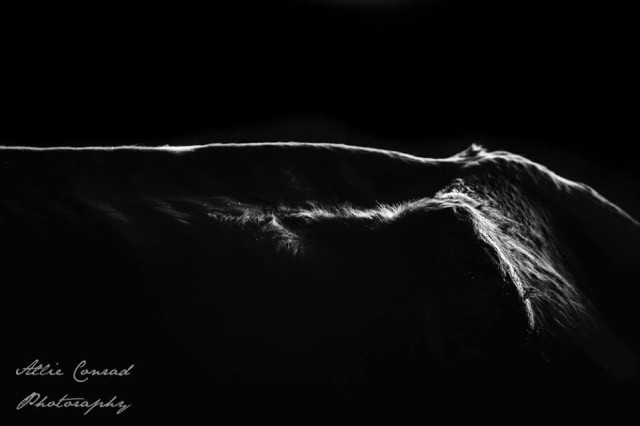 Leslie Threlkeld shares the story of a 2-year-old filly, her fight to survive and the people she has inspired through her heart and determination. WARNING: This post contains graphic images.

Her body condition score was less than 1 and her chance of survival a mere 2 percent. She was days from death. Miraculously, just over one month since the starving 2-year-old filly was rescued, she is still alive and fighting.

Her name is Hope.

Hope was rescued along with three other horses from a farm in North Carolina in early December 2014. A 3-year-old Paint named Arya went home with Rachel Medley. Hope, who was in the worst condition, went home with Rachel’s employee Katie Schaffer. The other two horses went to quality foster homes in the area.

The prognosis was not good and rehabilitating Hope would be a delicate process. Although she was desperately malnourished, there was a significant threat of refeeding syndrome, which is a potentially fatal shift in fluids and electrolytes that may occur when recovering from a period of starvation.

With such little tissue and muscle remaining on her frail body, Hope was kept on a strict feeding regiment. Despite their best efforts to carefully reintroduce nutrition, the day after Christmas, “something crashed.”

Hope laid down and couldn’t get back up. Distressed and confused by her inability to stand, she thrashed and struggled, developing what can only be considered severe bed sores as the fragile skin sloughed off, exposing bone. She wasn’t expected to survive the night.

“We stayed with her because we didn’t want her to die alone,” said Rachel. She and Katie spent the night of December 26 by Hope’s side in the pasture, taking turns warming up by a small campfire as temperatures dipped into the low 20′s.

“She was still alive in the morning. We called the vet (Dr. Lisa Kivett of Foundation Equine in Southern Pines, NC), and she couldn’t believe it. So we got a team of people, picked Hope up (she couldn’t have been more than 600 pounds) and put her in the trailer.”

Bad weather was looming, and the decision had been made to move Hope from Katie’s farm to Rachel’s, where there was a wide indoor barn aisle to drive the trailer into and strong beams above the stalls to set up a sling.

Sadly, Hope wasn’t strong enough to stand in the trailer for the 12-mile trip, so she had to make the drive lying down. Once at Rachel’s barn, she was even too weak to stand in a sling and she went down once again. But even as she laid on the soft bedding of her stall, Hope was eating.

Having Faith in Hope

“The first question anybody asks when they hear about this horse is ‘why didn’t they put the horse down?’” said Allie Conrad, Executive Director of CANTER Mid-Atlantic and a fierce advocate for horses in need. “Horses tell you when they’re done fighting. You come across horses that have been neglected their entire lives and they have that thousand-yard stare; they’re done with human beings and done with life. Hope never had that. She realized she was being helped.”

Despite knowing almost nothing but neglect in her life, Hope greets her caretakers with happy whinnies and nickers.

“She wants to be around people,” Rachel said. “She thrives off human interaction, tries to get in pockets … She’s extremely sweet but I wish there was a better word. She’s so in the moment. She loves for people to love on her. She revels in it. She drinks it in.”

Hope was eating and drinking voraciously, with unlimited access to fresh water, quality hay and multiple small portions of soaked senior grain every day. However, her immune system was so severely compromised that she couldn’t stave off the infection ravaging her body.

“All the calories and energy she’s taking in has been going to healing the wounds, which are grotesque,” Rachel said. “The ulcerations on her hips became infected and abscesses tracked under the skin past her stifles. Her legs swelled up bigger than both my thighs together and she dragged them behind her.

“Dr. Kivett lanced the abscesses and put drains in. We were really trying to avoid antibiotics because her gastrointestinal tract was so fragile, but we were concerned she would go septic, so we had no choice.”

Hope was started on Excede, and in six days she went from near septic shock to infection free. To keep the wounds clean and protected, she sports a patterned slinky with disposable diapers taped inside.

“To say she has made slow and steady progress would be a massive understatement. It’s been an unbelievably exponential, magical process,” Rachel said. On the day of this interview, Hope independently trotted several steps in the round pen chasing a donkey. “I almost passed out.”

The Light in Her Eyes

Allie wanted to capture Hope’s strength on camera and volunteered her time for a special photoshoot.

“I wanted to take portraits with low key lighting with strobes and try to express the light in this horse’s eyes,” Allie said. “The mare was into it. We set up off-camera strobes and set her in the middle of the barn aisle, and she sat there and posed.”

The resulting images are a study in contrasts: There stands an emaciated figure with sharp edges, covered in bright red lacerations and hairless patches of dead-looking skin, yet the eyes are bright and engaged. It’s almost like she’s wearing a Halloween costume.

“She’s stuck in that body but not supposed to be,” Rachel said.

Allie said her goal was to capture the horror of the situation and beauty of the animal’s soul altogether in one image. “Here is a horse literally trying to not die in front of us saying, ‘Please help me.’ I think it came through in the pictures because that is who she is. It was an emotional thing just to be there and hit the shutter button.”

Those images have reached a quarter of a million viewers so far, and Hope’s story has inspired thousands: from those who are at the farm daily helping her stand, cleaning her wounds, feeding her cookies and taking her for walks; the animal control officer who was instrumental in rescuing Hope and checks on her progress every day; people who have donated feed, bandages, blankets and money; and people who follow her progress online and help spread the word.

Hope has visitors, too. “There are visitors through the farm that just come through and want to see her in person,” Rachel said. “There is no way you can truly capture her essence other than meeting her face-to-face. You catch her energy immediately and fall in love. There is something very special about her.”

The Poster Child for Life

Hope’s will to live has inspired Rachel to pursue a dream. She is a combat veteran currently running a non-profit called the Old Glory Legacy Foundation, an organization providing relationship-building outdoor activities for soldiers and their families. For years Rachel has had a keen interest to open a horse rescue at the facility, too.

“Then this happened and this horse literally fell into my life. Both Katie and I felt so compelled. Hope is the catalyst that drove it into action,” Rachel said. The Sandhills Horse Rescue was made official this week. The website just launched at this link.

“Hope will affect more people and horses in a positive way down the road than she will ever know,” Rachel said. “As the rescue progresses and we’re able to fundraise, we can help more horses. The purpose will be to rehab them and get them to good homes.”

Hope, however, has found a forever home with her rescuers. “She and Arya will stay as a testament to what you can do if you fight, and she was fighting whether we were there or not,” Rachel said. “You would have to pry this horse from Katie’s and my cold dead hands for her to ever leave here.”

There is an ongoing investigation into the situation from which Hope and the others were rescued. The findings of the investigation will be reported to the District Attorney, who will then decide whether or not to press charges.

Rachel does not want to dwell on the past, however. “Talking about what happened to her before she got here doesn’t help anybody. We must look forward and use this as inspiration to motivate others to take action and help.”

If you would like send a care package to Hope or donate funds for her continued recovery and that of future Sandhills Horse Rescue horses, email [email protected] or mail to: PO Box 2055, Southern Pines, NC 28388. You can also donate online by clicking here.

Find “Hope the Wonderhorse” on Facebook to follow her story and send her lots of healing energy for the long road ahead.