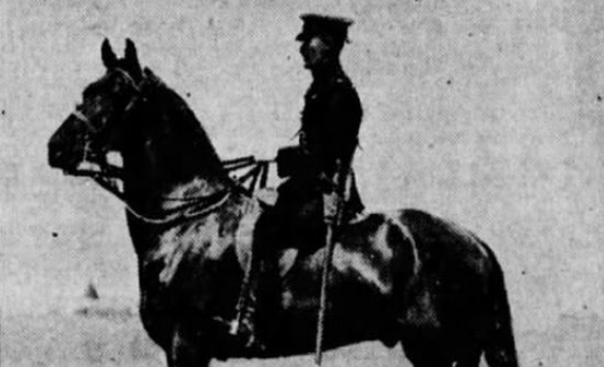 Eighty-three years ago, a local newspaper shared the story of an amazing connection of a man and his horse during WWI, and the tear-jerking tale of how the two came to came to good-bye.

In the fuzzy, obscure pages of the Winnipeg Tribune, a magical story came to life of a World War I horse that rivals the glory of the famous fictional glory of Joey and his master, Albert. Various accounts describe Lt. Col. I.R. Snider and his horse ‘Dandy’ shipping out to Europe together from their quiet life in Canada, fighting on the front lines, and after many terrible years together and apart, finally reuniting on Canadian soil after Dandy’s retirement from service. The most complete version is told below at the news of Dandy’s death at the ripe age of 39. Our thanks to the now defunct Winnipeg Tribune for sharing this original story on June 17th, 1931. It entered the public domain June 18th, 1981.

-Merciful Bullet Ends Life of Veteran Charger at Age of 39-

Old “Dandy” will parade no more on Decoration Day in honor of his fallen comrades. For Dandy himself is among the fallen. He had reached the great equine age of 39 years and was honorable shot today for humane reason on order of military veterinary surgeons.

And so this old nobleman of the horse world, whose proud spirit was attuned to that of his master, Lieut.-Col. I. R. Snider, goes “out” into the paradise of animals.

And Dandy had earned his rest. As a soldier. He could qualify for the Mons. Star, the British Service and the Victory medals and four service bars.

In former years, Dandy was seen by thousands on parade and carrying Lieut.-Col. Snyder. The rascal would shy feebly at a flutter of paper on such an occasion. Yet he would gallop without a tremor into a roaring inferno of shot and shell. A regular and beloved “old soldier” was Dandy.

This year Dandy was not on parade and his thousands of friends feared the worst when his place was empty.

Even in the darkened photo, Dandy’s shine and presence in his 30s is unmistakable!

Dandy was born near Montreal and from a colt was the beloved friend of Col. Snider. Came the call to arms in 1914. Dandy grazed contentedly on rich Portage pastures. But his master put his affairs in order and joined up, going overseas with the second division.

A proud day was when they were reviewed by the King, who, with a rare eye for a fine horse, took more notice of Dandy (at least this is Col. Sniders’ opinion), “than he did of the whole second division.”

And Dandy went to France in 1915. He smelled smoke and gas and blood of wounded men, though he himself escaped unscathed. But he had a bad attack of pneumonia and went in “dock”. Thence, Col. Snider had a daily bulletin on his condition.

When Col. Snider was recalled to England to take charge of the 14th reserve (Highland) battalion, Dandy was disconsolate. So was Col. Snider. The man-horse friendship was the talk of the corps. Finally, Dandy went back to England and his master.

When Col. Snider returned home to Canada in 1918, he left the appreciative eye of General Turner watching over Dandy. In due time, the older charger, now more than 20 years of age, was returned to Canada.

Now, man and horse who spend the heat of their day fighting the Germans, and who spent many subsequent years of peace together are once again separated. Dandy is at rest, a well-earned rest. But the Colonel is inconsolable.

“Nothing but the fact that his eyes, his hearing, his teeth, were gone and that he was suffering caused me to assent to this ‘mercy bullet’ for my oldest and most beloved comrade,” he declared.