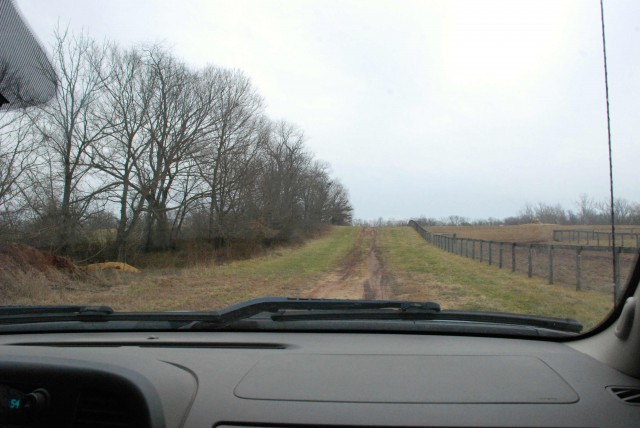 The footing is always good when following hounds by car on a rainy winter day.

The meet was at noon, and I awoke at nine on an overcast, cold winter day. Ordinarily, I would be panicking–but today, I had no horse to get ready, no boots to shine, and I didn’t even have to be at the meet until 11:55. I had never tried it before, but car following struck me as something I could get used to.

I didn’t envy the field, since the weather had been awful all week, and that particular fixture involved at least one creek crossing with a steep down bank (steep, slippery creek crossings are the one thing I detest about hunting). With the muddy conditions, I wondered if all of the shoes on the horses would make it back to the trailers at the end of the day…heck, I wondered if all the riders on the horses would make it back!

When the field moved off, briskly trotting down the road, four cars brought up the rear. I rode along with the our huntsman Larry Pitt’s wife Peggy. As she explained, our job was make sure hounds didn’t get onto the main roads and risk getting hit.

Car following at Potomac Hunt is much more high-tech than it was in the past–the staff all communicate with each other (and with Peggy) via walkie-talkie, and we tracked one member of the field via a cell phone GPS app.  However, we (and the other car followers without the benefit of walkie-talkie) mostly relied on the old way: shutting up and listening. Once the field made their way toward their first draw, Peggy turned the truck off, opened a window, and we strained our ears for the sound of voices (human or hound). It was so quiet we could hear each others’ stomachs rumbling.

This is what car following is all about.

We heard nothing. So we made our way to the main road, scanning the fields and woods for pinque coats as well as other tell-tale signs like the white flash of a deer’s tail or horses with their ears pricked toward the action in the trails bordering their fields.

Stop, listen, check the GPS, and start again–that was the order of the day. We made our way down driveways of hunt-friendly farms along the way to try and glimpse the field, but didn’t have much luck. Forget chasing the fox, we had enough trouble just chasing the riders!

Until we approached an intersection with another major road–just a two-lane country highway, but one where drivers frequently reach speeds of 50mph or above. We glimpsed hounds, heads down in the brush, hunting their way right toward the busy road. Suddenly things got a lot busier. Deer leaped out ahead of the hounds–were they running riot? Or were the deer simply startled and trying to get away? At the moment, it didn’t matter–we just had to get to the intersection and keep hounds from running out into the road. One of the whippers-in wasn’t far behind us, clattering down the road to a position where he could turn the hounds around.

The walkie-talkie crackled to life, “They’re hunting slowly there now.”

Slowly? This was the most action we’d seen all day!

“Oh–there’s the fox,” Peggy noted. She had just seen it cross the busy road in her rearview mirror, and I missed it! But our job didn’t concern him at this point. We parked the truck and walked along the edge of the woods.

Soon we heard less and less rustling as the hounds retreated, leaving the line of scent to return to the huntsman.

The “chase” continued. We parked the truck in a different driveway, the closest one to where the field was according to the GPS. We watched, listened, and waited. Was that a hound? Or just the squeak of the truck’s brakes?

I’m not going to lie–it wasn’t the most exciting way to spend time, but I took comfort in the fact that we were definitely warmer than the field.

Then a fox ran right in front of us! Perhaps the hounds had picked up this one’s scent?

And another! Just a few minutes later. This was more fox than I had seen the entire season of riding as a member of the field. The whipper-in followed shortly after, and I smiled at the absurdity of the whole endeavor. He, the huntsman, and the field were running around in circles, doubling back and re-doubling back (we have GPS proof!), and we had seen three foxes just by waiting for them to come to us.

After three hours, we car-toppers called it a day and drove back to the meet, where three Crock-Pots worth of creamy potato soup awaited us. And we didn’t even have to make one creek crossing.