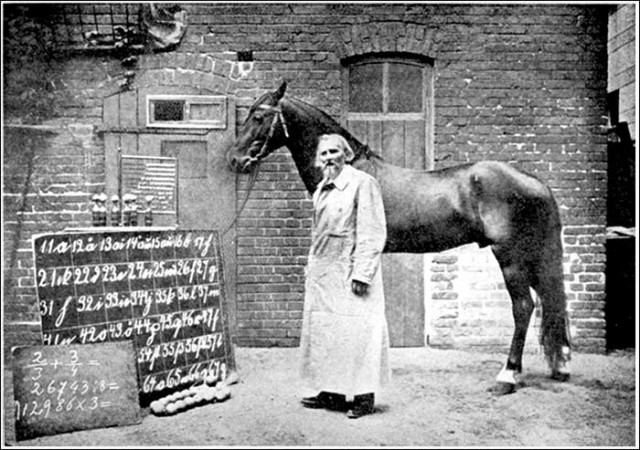 How was Clever Hans the Orlov Trotter able to answer math problems?

Right around the turn of the 20th century, Kluge Hans (“Clever Hans”), an Orlov Trotter owned by German math teacher Wilhelm von Osten, became famous for his uncanny ability to answer math questions, tell time, and even spell by tapping his hoof and shaking his head. Von Osten brought Clever Hans all around Germany, and no one could figure out the trick. Von Osten didn’t appear to be signaling Hans in any way, and it didn’t appear to matter who asked the question–Hans knew the answer every time.

Was it a trick? Or just a really smart horse? As it turns out, a little of both.

Von Osten taught Hans to count initially by placing wooden pegs in front of him and lifting up his foreleg in correspondence with the number of pegs. For example, for one peg, von Osten would point to the peg, and give the command “Raise the foot!—One!” At first, Hans tapped his hoof over and over, but over time, Von Osten taught him that he should tap just once for one peg by holding Han’s foot and rewarding him with bread and carrots whenever he got the answer right. Eventually, Von Osten added more pegs in front of Hans (always left to right) until he mastered the numbers up to 100, and it was no longer necessary to point at the peg or guide Hans’ foot.

But Hans soon advanced beyond counting pegs. Von Osten taught Hans to add by teaching him the words for different numbers as well as the word “and.” He did this by placing wooden pegs in front of Hans, some of which were obscured by a cloth. For example, for 3+2, von Osten would show three pegs, say  “Three AND,”  then uncover the other two pegs to finish the question “Three AND two is?” Eventually, Hans seemed to be able to grasp simple arithmetic questions verbally, without the wooden pegs. He also moved on to different subjects like multiplication, spelling, identifying colors and musical tones.

At the time, Clever Hans’ abilities astounded ordinary people and intrigued scientific circles. In 1904, psychologist Carl Stumpf collected an investigatory council consisting of a veterinarian, a circus manager, a Cavalry officer, a number of school teachers, and the director of the Berlin zoological gardens, and they all concluded that there was no fraud in the Clever Hans act. But they still didn’t understand how it worked, so they enlisted the help of Oskar Pfungst, a volunteer assistant in Stumpf’s laboratory, to conduct more tests.

Pfungst got to work. He tested several variables: isolating Hans and the questioner from the crowd, switching the person who asked the questions, using blinders so that Hans could not see the questioner, and having questioners ask things that even they did not know the answer to. He even played the role of horse himself, and observed the body language of assistants who asked him similar mathematical questions.

Pfungst found that it didn’t matter who asked the question for Hans to get it right. However, it did matter whether the questioner knew the answer to the question, and whether Hans could see the questioner. Why? As Pfungst observed when he observed his assistant-questioners, they were giving off involuntary, nearly imperceptible body language of approval or relaxation once Hans gave the correct answer. This is now called the “Clever Hans effect” and now scientific studies try to control for it.

Other animal vaudeville shows of the time also took advantage of animals’ ability to perceive slight changes in humans’ demeanor. According to Pfungst’s report, several dog acts and a horse named Rosa were able to display similar acts of human-like knowledge when their handlers bent forward slightly–a movement imperceptible to the crowds, who watched the show head-on.

If you want to read more about the investigation of Clever Hans’ abilities, including Pfungst’s exact methodology, check out his full report, available free online via Project Gutenberg.