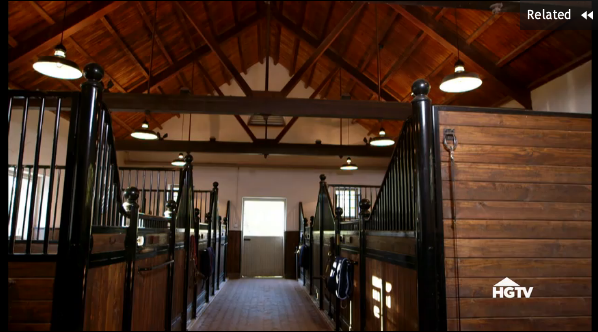 There’s no place like home when home is the barn.

Johanna Walters and her husband Brian Sweeney converted an old barn in Gwynedd Valley, Pennsylvania where Johanna once boarded into a beautiful home where the couple and their horses now live.

The project took three years and the transformation is pretty incredible. The stables were totally gutted, and while some of the stalls were rebuilt, the rest became a great room and kitchen. The hay loft, meanwhile, became bedrooms.

“I used to ride out of this barn when I was in high school. I always had dreamed that somebody would be able to fix it up and bring it back to what it had been years ago… I think it’s every little girl’s dream to be able to live with her horses,” Walters said.

Some parts of the building were left intact, like the original herringbone floor and vaulted ceiling in the stables. The living area was built around the original beams and complemented with wood accents and equine artwork.

Their home was recently featured on an episode of the HGTV show “You Live In What?” (like living in a barn is weird or something). I can’t help but think about what a great apartment building my old barn would make. Who’s up for an equine commune? Anyone?