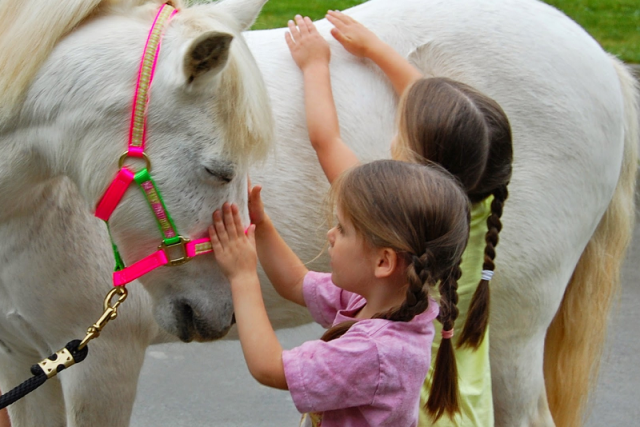 Our most primal parenting instinct is to protect our children from danger — and big, powerful, unpredictable horses definitely fall into the “danger” category. Catherine Ford discusses learning to trust without letting down your guard.

A video made its rounds recently of a little kid leading a horse. It was met with the usual “aww precious” comments and an equal number of “that is so dangerous, that poor horse, a kid isn’t capable…” I find myself changed now that I have my own kids. Something as simple as watching The Black Stallion, I didn’t stare with the wide-eyed wonder I used to, dreaming of riding my own horse just like that. Instead I was thinking, “Good grief, what kind of a man would put a kid on a horse that hot and set them loose on a track?!”

When the first horses came to work along with people it also began the first interactions between kids and horses. It’s something we take for granted sometimes, the way horses are often different with kids. Not all horses are this way, there’s an exception to everything, but most I’ve seen in their quiet moments with sweet kids, are. A few examples from my own herd:

Czech is an intimidating and powerful horse. He’s well mannered but he can spook and get worked up like any good Thoroughbred-shaped kite on a lead rope will. Hand him to my tiniest daughter and he’s instant putty.

Tolerating no kisses from me without acting like he’s been somehow wronged by my affectionate nature, he strains to reach them from my oldest daughter.

Spotlight, who runs sometimes from me in the pasture, kicking up his heels if he feels like more grass is better than coming in his stall at night, is happy to stand still loose in the field while she gets on her tiptoes to drape a rope around his neck to come in.

Pegasus puts up with constant kid mugging with controlled delight. If a kid is with me coming up to the barn, he’ll nicker at them with tiny pricked ears, knowing he’ll get in the barn first if the kid has any say.

While I get chores done I’ll hear a child in Pegasus’s stall softly apologizing to the Welsh pony for every cocklebur she dislodges from his fuzzy legs, telling him how her day was at school. Pegasus stands still even once he’s done eating.

Silly Bandon also sees them as friends. He respects their space and ruffles their hair with his nose. He keeps a mischief in his eyes though, like they are fellow colts — that makes me a little more aware. Still if you toss a kid up on his back you won’t find a more careful horse being led.

I used to worry when I’d walk with a kid up the hill through the pasture to the barn. Often the Thoroughbreds would come right up on us and walk trying to keep a muzzle touch on the kid’s shoulder. I’d shoo them away and demand space, then one day I realized that was just the horse’s way of knowing where the kid was so they didn’t get stepped on. That and the kids giggled when poked.

What is it about a horse that makes them this way towards kids? Children’s size, their sweet smell, or just their equal ranking among horses in the world of adults, who knows. Maybe it’s the grand idea that horses see our souls better than we do ourselves and a dirt-covered kid usually has a pretty good one.

Of course, be smart about it. Don’t send kids around horses that aren’t used to them or don’t know how to be safe around them. Don’t expect your horse to be careful of your child when it’s feeding time or a hay pile needs defending from other horses — for that matter, don’t expect all horses to like kids in all situations. Czech is great with them on the ground and stresses if you put a child on his back. It’s up to you to protect your kid first and foremost (not project your human parenting values onto your horse), but if you get the chance, let the kids find a relationship with your horse without hovering too much. Let go a little and let them see what’s there — it might be something special that you can’t explain, either.