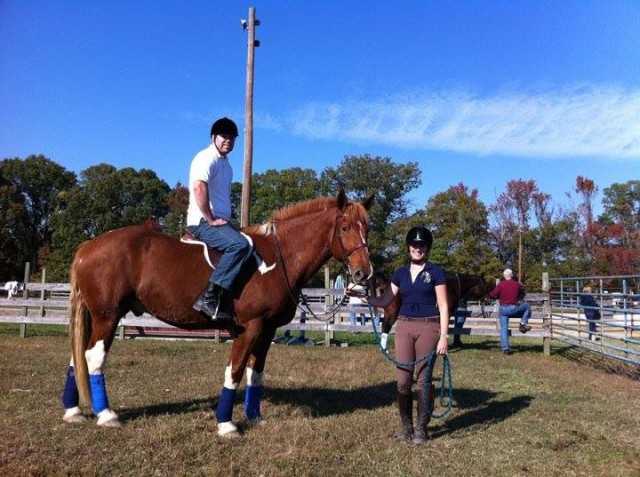 For this week’s 24-hour photo challenge, we received an overwhelming 250+ entries. We couldn’t pick just a few, so here are our favorites in the saddle!

Emily Hannon Walker: This is my boyfriend at the time, now husband Seth Walker, playing polo on my jumper Dallas. They both were great sports about it and had a blast! They were the stars of the group playing!

Amanda Hill: His first time ever sitting on a horse. He took one step lol my poor jumper.

He’s ready to ride his ‘war horse’ into battle, but she looks more like she is ready to take a nap! #horsenation #percheron #lily #damon #boyfriend #battle #naptime #warhorse

Cathleen Rahschulte: My husband who rides with me about once a year. The hunchback of Verona. Lol

Jeanine Reppenhagen: My husband’s maiden voyage on our horse Navajo AND first time in an English saddle and nope he doesn’t ride (in case you couldn’t tell)! “Just shift your weight a little to the left Hun and you’re doing great”! LOL what a good sport

Harley Cozewith: Blane’s horsepower usually has two wheels – motorcycles. However, in order to join me on a 125 mile, 6 day ride cross country on the Galway Coast of Ireland for my 50th birthday, Blane took lessons at home in my english saddle on my gelding for 6 months. He was a total rock star, particularly given that the summer of 2012 was the wettest on record for the UK. Go riding!!

Morgan Elaine: My awesome hubs who agreed to take my weekly lessons to keep my greenie going during my pregnancy

Bonnie Kibbie: My atypical #horsehusband… I’M the one that gets stuck grooming for him more often than not! Lucky for me, he tunes all my horses up for me and usually has all the barn chores done before I get home

My once non-horsie guy turned horse guy. He even bought a horse for himself when we were dating in high school because he knew it would score him points with this crazy horse girl. He didn’t even know how to ride. Now he’s one heck of a horseman and the best show Dad ever. He can ride with the best of ’em, throw a rope, tack, muck stalls, throw hay, back the trailer, groom, read a dressage test, help us learn a jump course, tell us we’re on the wrong lead and holding ponies all day between jumper rounds is his specialty. He even coaches the non-horse Dads on the sidelines about leads, strides and diagonals during show classes. Not to mention he looks good doing it! He’s the BEST! #horsenation #horse #dutchwarmblood #handsome

Tiffany Cunningham: The most awesome boyfriend who agreed to a beach ride (on my Prelim event horse) when it was 28 degrees out and windy!

Erin Kenaley Jones: Adult Leadline at our local Gymkhana. Hubby did it because they were giving out cupcakes instead of ribbons. Horse is a 17+ h draft cross. Husband is 6’7″. I am 5’6″! The horse (normally a saint) was offended by the heaviness of his new rider and was pushing me around the whole time. After we left the arena, hubby scolded me for not taking MY cupcake so he could eat it. “I was busy making sure you didn’t die” I said.

An ode to horse husbands. He told me to keep my heels down! Someone’s been watching too many riding lessons.

Meredith Eskridge Mannheim: This is my hubby. I was the one that grew up riding. He started after we were married. He picked fox hunting for us to do together. And this is him returning from hunting. And I am the groom as I was suffering from back problems. He hunts regularly with or without me!

Katie Doherty: From trailering my horse and I everywhere, to being the best show groom and checking on my horse when I cannot, as well as learning how to jump a full course with lead changes in our first few months together…and just about everything in between…. 2 1/2 years later…and he still hasn’t run away yet!

Keep an eye out for our weekly 24-hour photo challenges! We’ll announce them every Tuesday via Facebook and Instagram.