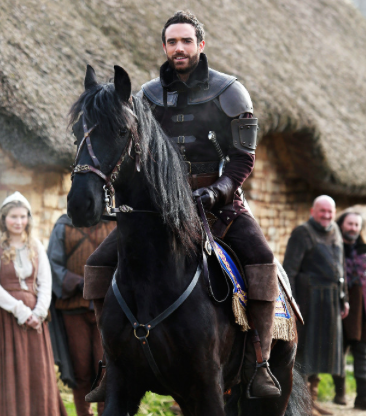 A new knight in shining armor has hit the airwaves.

The show is self-described as “fairy tale cliché” and should appeal to fans of Spamalot and Monty Python. Let’s talk hot guys, a strong female lead, and horses.

First, Sir Galavant played by Joshua Sasse. Galavant is a jilted knight, soured by the fact that his one true love chose to marry the show’s villain for money. He’s arrogant and obnoxious from the outset, but has a heart of gold. He’s also easy on the eyes. #becausestubble

Sir Galavant isn’t the only game in town, though. Men of all ages, sizes, and hotness levels abound. John Stamos even makes a guest appearance as Jean Hamm, Galavant’s jousting nemesis.

One of the best moments of the show is when Galavant and Jean train too hard for the final match at a tournament. Having been too sore to get out of the saddle more than a few times… this equestrian could relate.

Anyone who has watched The Princess Bride knows that for every knight, there’s a princess behind the scenes. Galavant is no exception and though he’s pining for his long lost love, he’s traveling with Isabella. Isabella is sassy and knows how to handle a sword. She’s also gorgeous.

Though horses aren’t featured as much as I’d like them to be, equines are well represented in the comedy. The actors all appear extremely comfortable in the saddle, which is super rare for TV. Galavant rides a Friesian because… of course he does.

Isabella rides a white horse with the best forelock I’ve ever seen, while the squire rides a cute little bay.

With great one-liners and song lyrics (did I forget to mention this is a musical?) that include, “Truth be told, you’re growing on me like mold,” this little show could be destined to become a timeless classic.  So far it’s been more about comedy than an epic adventure, but we’ll see how the season plays out.