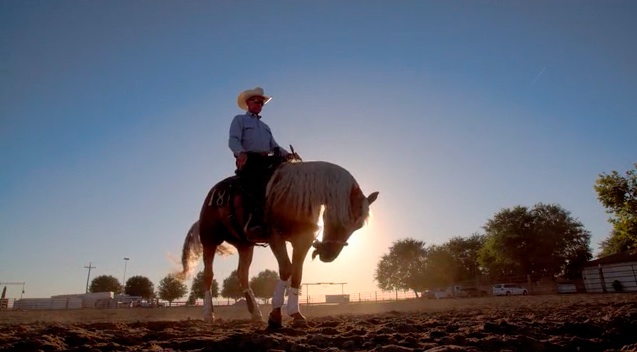 A new documentary set to release in 2016 shows us reined cow horse like we’ve never seen it before. Check out this sneak peek!

For reined cow horse riders, western aficionados or any equestrian who respects the beauty of horses and horsemanship, you won’t want to miss this documentary that’s slated for release in 2016. Production began in March of 2014 with a little help from a Kickstarter campaign that managed to raise over 140% of the production team’s goal. Here’s the Kickstarter trailer to give you an idea of what the finished documentary will look like:

Pretty powerful stuff: even if you don’t know much about the discipline of reined cow horse, any of us can appreciate the beauty of the images and the ceaseless quest of the horseman to constantly improve his relationship with the horse.

Reined cow horse bridges the gap between the working cowboy and the show ring: it formalizes the maneuvers a cow horse should perform into the reining portion, it highlights the inherent cow sense in the cattle portion and really lets the cow horse shine in the cutting pen. As the cowboys featured in Down the Fence mention, winning the world championship buckle is the holy grail for horsemen–but working with the horses themselves is often privilege enough.

As a former reined cow horse competitor myself, I can’t wait for this documentary to be released: in two and a half minutes, the above trailer encapsulates my brief few years dabbling just at the state level in the discipline. The amount of teamwork involved between horse and rider to take a cow down the fence is hard to describe, and the intense bond and sense of fulfillment I felt with my competition mare went far beyond words. Even now just moving cows around the farm on a fairly unsophisticated horse, there’s a sense of accomplishment that I never got from the hunter arena or reining pen–the sense that you and your horse have done something remarkable together.

Though filming began in March of 2014, producer/director/writer MJ Isakson has been in the research process for over six years, tracing the origins of the discipline and following the careers and stories of many reined cow horse trainers all over the world. With the co-director/director of photography Lori Adamski-Peek being a horsewoman as well, the finished product won’t be another overly-dramatized Hollywood feature but a true glimpse of the modern cowboy life.

For more information about Down the Fence, please see the documentary’s website.