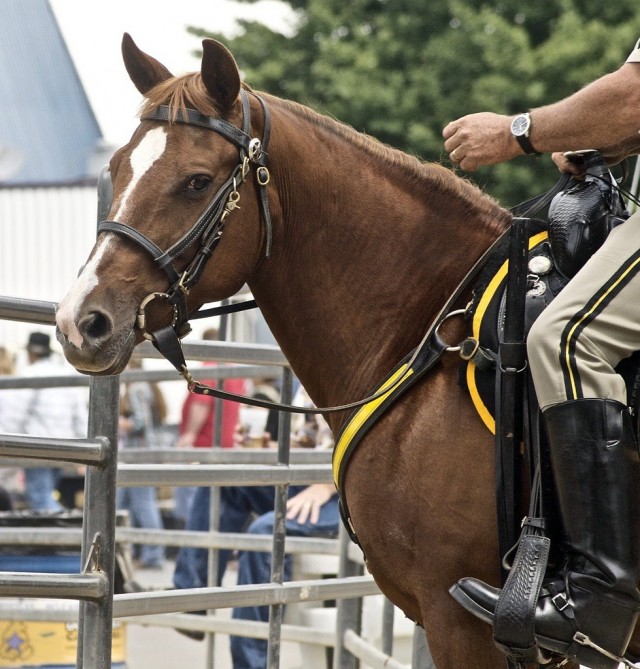 A Baltimore police horse is being sued for $1 million after biting a child’s hand.

According to the Baltimore Sun, The incident occurred in August 2013 during the Baltimore Grand Prix.  The horses were providing security and crowd control at the event.

According to the lawsuit, when mounted officers approached the child and her mother, the child became excited and waved. Officer Arturo Garvin told the girl she could pet Buster… but then Buster bit off a little more than he could chew.

“The horse did not release its bite and the hand had to be ripped from the horse’s mouth,” says the lawsuit filed by mother Lisa Gillespie. The left hand of the girl, who has cerebral palsy, “was severely injured with bone showing and needed two surgeries.”  Gillespie accuses the mounted officer of gross negligence and negligence for failing to prevent the horse from attacking without cause.

“Garvin was not negligent and did not have an “evil motive, influenced by hate, to deliberately and willfully injure” the child,” countered an attorney speaking for the city. “Gillespie and the child “requested to touch a large animal, chose to touch it near its mouth, and assumed the risk of that animal’s behavior.”

The Baltimore Police Department and Officer Garvin declined to comment, citing the department would not comment on pending litigation.

Read more at the Baltimore Sun and weigh in with your thoughts in the comments section below:

Was the officer negligent in not giving explicit instructions on how to pet the horse?

Or should children learn to keep their hands to themselves?