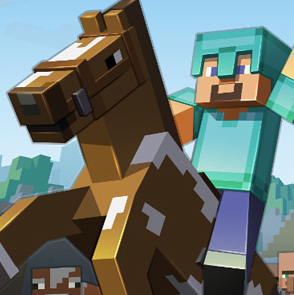 The popular video game has just added a whole lot of equestrian appeal.

Minecraft allow players to build constructions out of textured cubes in a 3D world. Other activities in the game include exploration, gathering resources, crafting, and combat. Multiple gameplay modes are available, including survival modes where the player must acquire resources to build the world and maintain health, a creative mode where players have unlimited resources to build and the ability to fly, and an adventure mode where players play custom maps created by other players. With over 18,000,000 downloads, Minecraft is kind of a big deal.

The latest update may make it even bigger, because now you can tame your own horse and donkey to ride within the world. Horses have three in-game variants: Horses, Donkeys, and Mules. The variants can appear in one of several different coat colors that exhibit different markings.

After you tame your horse, well, it starts to become as tricky as real horse ownership.  Feeding is a necessity of course…

And breeding becomes an option, so long as you have “Golden Apples.”  One curious part of the programming is that all foals are born wild yet they have an attachment to their dam throughout the game, even if not tamed by the user.  There is a lot of trivia and copious instructions (all of which you can find here), but let’s just say… these programmers took their equines seriously.