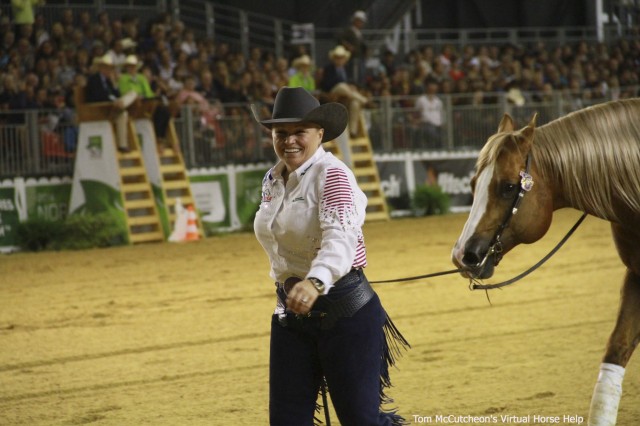 Mandy McCutcheon! See what the first lady of American reining had to say about taking home the inaugural title.

We asked and you voted for the first-ever awarding of Horse Nation’s Bad-A$$ Horseperson of the Year, intended to spotlight a horse person in any discipline who’s going above and beyond the (ab)normal expectations of horsemanship. HN’s writers each nominated a horse person they felt captured the spirit of being a  Bad-A and polls opened to the readership last week.

The nominees were a truly inspired (and inspiring!) group of horse people from a variety of disciplines: combined driving’s wild man Boyd Exell, dressage’s living legend Charlotte Dujardin, eventing trailblazer Mary King, the leading lady of reining Mandy McCutcheon, Mustang Makeover champion-and-eventer Elisa Wallace and even a non-human, Journey the service dog and the first dog to receive FEI credentials. It was an all-star lineup in every sense of the word.

It was a close race for the coveted number-one position. Our congratulations go out to runner-up Elisa Wallace of Wallace Eventing! But when the dust settled on Sunday evening at the closing of the polls, one horse person had a lead on the pack. We’re pleased to introduce the 2014 HN Bad-A$$ Horseperson of the Year, Mandy McCutcheon!

In Mandy’s words: “It takes a special team and a special horse to get one person this far; I have my parents and Tom to thank, and of course Yellow Jersey. It truly takes a village. Competing at the World Equestrian Games was the highlight of 2014 for me for sure; it’s going to take a while to top that one!”

“It’s been super fun being nominated for Horse Nation’s award; I was in amazing company with the other nominees. It was overwhelming and humbling to see how much the reining community got behind my nomination, beyond just my own family! I was thrilled to see so much support, so many Facebook shares, and so many supportive comments. It’s just so lucky to be able to do what you love so much with so many people behind you.”

Kat Paschal, marketing & public relations manager for Tom McCutcheon’s Virtual Horse Help, reveals that the feeling is mutual: “Everyone at Tom McCutcheon Reining Horses is privileged to be a part of Mandy’s life. I know I speak for everyone here when I say that she is an amazing boss, teammate, mentor and an inspiration to us all.”

Mandy and the rest of the team at Tom McCutcheon Reining Horses, Tom McCutcheon’s Virtual Horse Help and Yellow Jersey Prospects would like to thank everyone who supported Mandy through the voting, as well as throughout an amazing 2014 season. As Mandy says, it takes a village, and the support of the equestrian community has been a major part of the team’s success.

Mandy and Yellow Jersey at the jog for the WEG qualifier. Photo courtesy of Tom McCutcheon’s Virtual Horse Help.