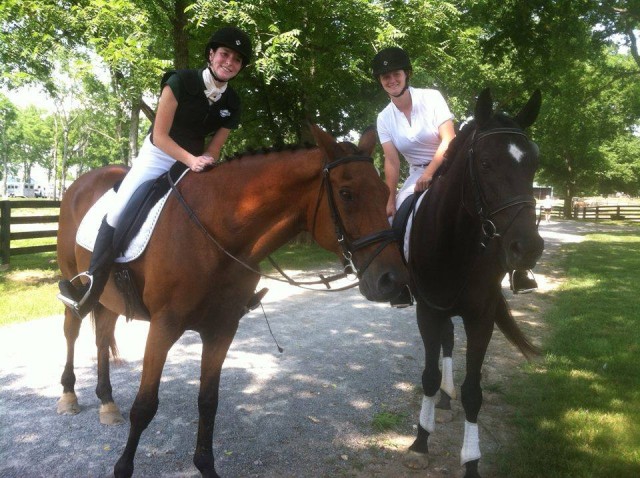 As Christmas approaches, Meagan Parker reminds us to cherish the good stuff while it lasts.

As we come to Christmas, everyone is playing with their horses and giving thanks for all of the ones that have been influential. We’ve also seen the death of yet another top level horse this past week, which we mourn with the riders and owners. However, with the celebration and mourning that comes with these international figures, it makes me realize that there’s another horse that doesn’t get the public recognition when he or she passes: the schoolmaster. Not to say that the international, top level horses don’t deserve the spotlight, but, after a personal loss this fall, I feel like we should take a look at the bomb-proof, ever giving school master.

This fall, the farm I work at and had the pleasure of being working student for lost a horse that had touched the lives of many students and workers during his 26 years of life. He was a lovely bay Trakehner named Vespucci, aka Pilot. He was the epitome of what you want in a schoolmaster. Pilot never said no — he gave all that he had every time you sat on him. If you wanted to know what a new rider knew, you pulled out Pilot and he would let you know.

Pilot didn’t make it to the very top levels of competition, but at 25 he was still rocking around 2nd level dressage tests.In between shows, he was teaching our beginners how to canter. His work ethic and try made you feel like you were going out to a CDI and winning, even if you were just trotting around and playing. He matched your level, never expecting more than you could do. As you improved, so did his expectations.

Not only was he a star in the ring, but he was 100% trustworthy when it came to daily farm life. Time to eat? He would calmly walk himself to his stall. Every day, without fail. He quietly stood in his stall, never making a fuss. If people were in the barn, he would poke his head out, happy to receive any and all attention.

We lost our amazing boy to colic, a fiend that takes many a best friend. I managed to get him to the barn after seeing him down in the field, but that was all I could do. He went down one last time, but when I asked him to get up, his try shone through again. When I realized he couldn’t get up, I stopped asking, but he kept trying since he knew that’s what I wanted. He continued to try until his mom, the woman who had owned him all 26 years of his life, came and we sedated him.

I’ve seen a lot of death this year, having to put down several earlier this year, but watching this horse and his owner having to come to terms with the fact that, even though she wasn’t ready, she had to let her sweet man go was the hardest thing I’ve done. We’re never ready to let them go, no matter how old they are.

This Christmas, go hug your own Pilot. Let him know you think he’s as good or better than the top level horses you watch on TV. Remind him you’ll do right by him, should the end have to come. Keep sending your well wishes to the riders and owners of those that do lose theirs. Appreciate every day your Pilot gives you under saddle or in the barn. Give them an extra big carrot for Christmas and have a happy holiday with all your farm.

My name is Meagan Parker. I’m a USDF Bronze Medalist and event rider from Huntsville, Alabama. I ride a 10-year-old Trakehner mare named Kalypso, aka KJ, and we’re gearing up to debut at Training level at our next event.