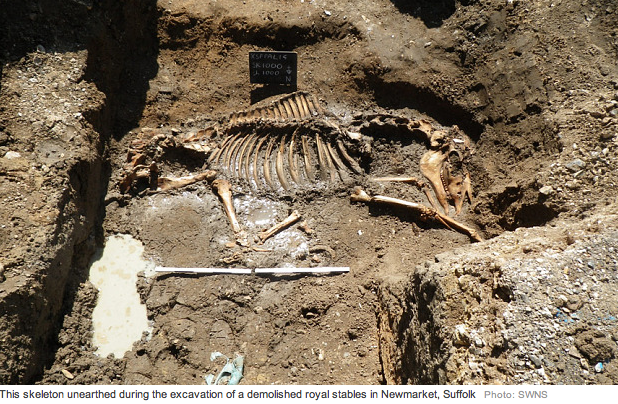 Archaeologists may have discovered the skeleton of the legendary 19th century stallion Doctor Syntax.

Bones were uncovered during the excavation of one of the homes of King Charles II, in Suffolk, England.  The skeleton is almost completely intact and measures the same height as Doctor Syntax, 15 hands.  Since the horse is one of the most famous horses in British racing history, winning 36 races from 1814 to 1832, the find has excited the historians at the National Horseracing Museum.

Doctor Syntax was a bay or brown horse standing 15 hands high, bred by William Knapton at Huntington in Yorkshire and owned during his racing career by Ralph Riddell of Felton Park in Northumberland.

The stallion’s racing career was not flawless.  At his first race in April 1814, he famously fell then was remounted to complete the ten furlong course in last place.

But 1815 was a different story.  In March, he won his biggest race, winning the 100 guineas Gold Cup over three miles.  Through 1816 to 1823, the stallion continued winning, captivating the public.

Doctor Syntax began his stud career at the grand old age of 13.  His most notable foal, the mare Beeswing, emulated her sire by winning many long distance races in the north, but improved on his record by travelling south to win the Ascot Gold Cup as a nine-year-old in 1842.  Before the appearance of widespread rail travel, horses were typically walked from their home stable to the racecourse, meaning that northern horses would have to spend weeks traveling if their owners wished to compete in the south of England.  Doctor Syntax was euthanized at Newmarket in 1838.

Which brings us to 2014, when a construction worker found the skeleton during excavations for the new National Heritage Centre for Horseracing and Sporting Art at King Charles II Palace stables.  Experts believe the unusual siting of the remains of this horse indicate that the animal, even if not Doctor Syntax, was a particular favorite of the King.  Future DNA tests will reveal whether or not they truly found “the good old doctor.”