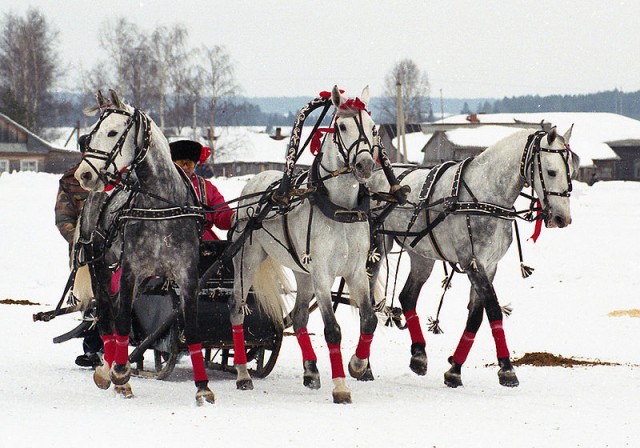 This unique three-horse hitch has become a cultural symbol of Russia with a tradition as rich as its harness bells.

Picture in your head the one-horse open sleigh described in that holiday staple “Jingle Bells”–the sight and sound of a horse-drawn sleigh or wagon is usually enough to bring a smile to anyone’s face, especially around Christmas. The horse and sleigh has become a symbol of the holidays, at least in the western world–but in Russia, it’s the three-horse troika that embodies both the spirit of Christmas and Russian culture.

If you’ve ever seen one, you’re not likely to forget it: three horses moving at speed, the center horse trotting while the outer horses gallop, whisking the sleigh over the snow so fast that the troika’s often called “fast as a bird.” A hundred bells announce the arrival of the troika; the ornately-painted hoop over the center horse catches the eye. The troika was used to carry both rich and poor, and also to bear the mail (before the arrival of the railroad.) There’s something both beautiful and heartbreaking about the sight of the troika surging across a snow-covered landscape, the only moving thing for miles (or perhaps I’ve just listened to this Russian folk song “Here’s the Troika Rushing” too many times–those Russian folk songs for whatever reason get me every time.)

The troika differs from a standard three-abreast hitch: the center horse, called the “shaft horse” provides a large part of the draft power pulling the load. He’s aided by the outer horses, who are curved in their harness to the outside, allowing them to canter or gallop. A skilled driver could rest one of these galloping horses while asking the other to pull harder, keeping the entire team fresh for long distances. The wealthy of Russia preferred the fine Orlov Trotter for pulling their troikas, a breed developed in the 18th century by crossing European mares with Arabian stallions: the result was a powerful fast-trotting horses, predominantly gray and black. The breed still remains Russia’s most famous horse. To this day, Orlov Trotters are raced in harness, both single and in troikas.

The troika driver had to be a skilled hand to navigate three horses at speed and manage the strength and energy efficiently to share the load between the horses. The prestigious position of professional coachman was often hereditary, passed down through families. At one point in Russian history, only groups of three or more people were allowed legally to use a three-horse troika; one or two people driving could only use one horse. (The mail traditionally used the troika because of the weight of the load.)

The shaft bow is unique to Russian hitches, attaching the front ends of the sleigh shafts over the shaft horse’s neck. These bows help the horse manage a heavier load and assist in a smoother start as the shaft horse throws his power into the collar (the outside horses wear lighter breastcollar harnesses.) The shaft bows are often ornately decorated or carved.

The harness bells–over a hundred can be found on some harnesses–are a traditional part of the troika to announce the impending arrival of the hitch. Europe’s coach horn, which was similarly used to warn traffic of a fast-approaching carriage or coach, did not catch on in Russia, nor did the whistle–drivers preferred the bells, which were attached to the harness itself, the decorative tassels and “brushes” and the shaft bow.

A traditional troika at the Moscow Stud. Source: Wikipedia

I could wax sentimental about the majesty and magnitude of Russian history, culture, literature and music as represented by the troika for hours–but I’ll spare you. Sometimes it’s best just to sit back and let the harness bells do the talking so we can enjoy Russia’s unique hitch tradition.