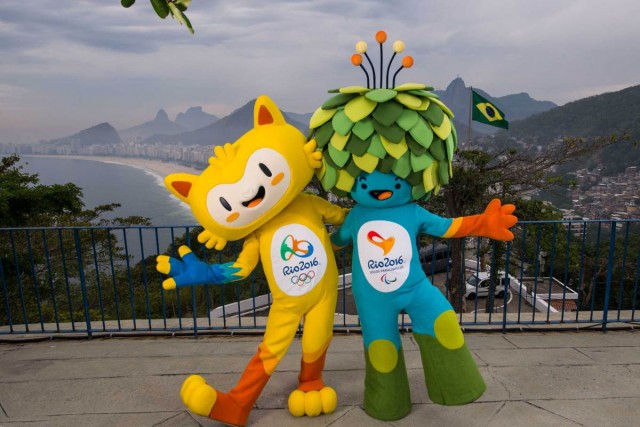 Vinicus, Tom and friends will haunt your dreams.

Photo via the Brazil Olympic Committee

The 2016 Olympic Games in Rio de Janeiro unveiled the mascots for the Games last month, and now fans have voted on names for the terrible little creatures: Vinicus and Tom.

What I want to know is whether Vinicus and Tom know these creepers are named after them. But I digress.

Olympic mascots are meant to embody a key aspect of the host country. So surely there’s a fantastic explanation for what the hell these things are supposed to be, right? Sort of.

Apparently, Vinicus is supposed to be a cat-monkey-bird hybrid. You can’t make this stuff up.

“He can stretch his arms and legs as much as he wants and has a very acute sense of smell and amazing powers of hearing,” according to this press release.

That seems like a great way to teach kids about the laws of nature and physics.

But Vinicus and Tom are just the latest in a long lineup of terrifying Olympic mascots. A few of their predecessors:

Is that a friendly beaver or the Creature from the Black Lagoon? You be the judge, HN.

Named “Amik,” which means beaver in Algonquin, a language used by the North American Indians in Canada, his ribbon was meant to symbolize the ribbon used on the medals at the Olympics …

Or Amik’s tool to blindfold the medalists before dragging them to a watery grave in the black lagoon. It’s open to interpretation.

Guy St-Arnaud, Yvon Laroche and Pierre-Yves Pelletier are responsible for creating this little holy terror. They actually won a contest to make this the winning mascot. God help us all.

Meet Phevos and Athena — clearly the product of some sort of science experiment gone horribly wrong. LOOK AT THEM.

The design firm, Paragraph Design, modeled the mascot after a “daidala,” which is a terra cotta doll that clearly must have given children nightmares back in their heyday in the 7th century BC.

Does anyone else think “Wenlock” sounds like a name straight out of Grimm’s Fairy Tales? It gets worse.

According to Olympic.org, “the light on his head is based on those found on London’s famous black cabs. The shape of his forehead is identical to that of the Olympic Stadium roof. His eye is the lens of a camera, filming everything he sees.”

Well if that that doesn’t keep you awake at night … Here comes Wenlock, everybody! Hide yo kids, hide yo wife!

Other Olympic mascots that are trying to be cute but just come off as creepy:

2006 Winter Olympics in Turin: Neve and Gliz, “a humanized snowball and ice cube”

At the 2000 Olympics in Sydney, Fatso the Fat-Arsed Wombat was created in protest against the commercialization of Olympic mascots and ultimately became more popular than the official mascots.

Maybe someone needs to come up with an alternate mascot for 2016 — or just give a real animal the job? Capybaras, a large but loveable rodent (think 150-pound guinea pig) that some people keep as pets, are native to Brazil, and they’re soooooo cute!