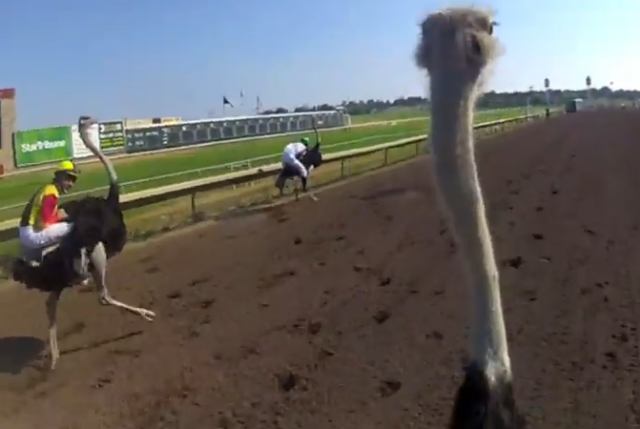 Last week we posted a video of camel dressage (of which I am still in awe… camel one-tempis? MIND BLOWN.) How do you top that?

Can you imagine being on the back of a bird that’s taller than an NBA player and can run up to 43 miles per hour, yet it has a brain the size of a Skittle? No thanks.

As unappetizing as it may seem, ostrich racing is for real. It’s fairly popular in modern-day South Africa and sporadically crops up elsewhere on the globe. Chandler, Arizona hosts an annual Ostrich Festival, which features ostrich races, and races also take place in Virginia City in Nevada, Canterbury Park in Minnesota, Prairie Meadows in Iowa, and Ellis Park in Kentucky.

I know you’re struggling to wrap your head around this concept right now, so here’s a video of the 2014 race at Canterbury Park:

So what’s it like to ride a bird? A couple years back reader Kim Bradley wrote this hilarious piece for our sister site Eventing Nation about her own experience of learning to ride an ostrich. Here’s an excerpt:

The first thing to know is that riding an ostrich is nothing like riding a horse. But a quick side-by-side comparison, horse vs. ostrich, will show you why they are different.

Look into a horse’s eyes. You might see affection, indifference, loathing, fear — whatever it is, you’ll see something. You’ll sense that somewhere behind those eyes there’s a functioning brain, making decisions that might occasionally be described as rational.

Look into a ostrich’s eyes, and you’ll be able to check your hairdo. That’s about it. Gram for gram I don’t think ostriches’ brains are that much smaller than horses’, but ostriches clearly have a lot less neurons firing.

Look at the horse’s neck. Nice and sturdy, with all that handy mane to grab.

Look at the ostrich’s neck. If you have any doubts about its flimsiness, give it a little push. The neck will coil away from you like a large and hairy snake. Nothing to hang onto there.

Look at the horse’s legs. Four of ‘em. One on each corner. Kind of comforting, really.

Ostrich, two legs. Not as good.

In fact, riding an ostrich is remarkably like riding a pencil-necked two-hundred-and-fifty pound chicken.

Wow, that sure makes me want to go ride an ostrich. Not. But a vicarious ride? Sign me up!

Here’s a helmet cam from jockey Derek Bell, who rode his aptly named ostrich “Ostracized” to victory in the Don’t Lay an Egg Dash at Canterbury Park in 2012. Ostracized looks raring to go before getting distracted right as the gate opens. But he gets right down to business after he breaks and somehow ends up winning the race.