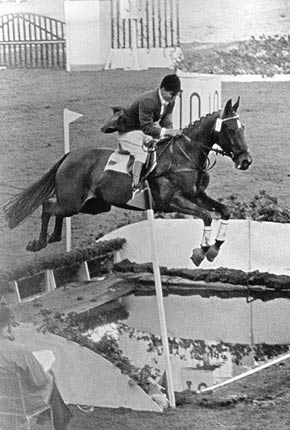 Did you know that Halla, the German show jumper who won three Olympic gold medals, was a Standardbred?

By a Standardbred out of a French trotter, the 16.2-hand mare was first trained as a steeplechaser, then competed unsuccessfully as an eventer (she was too nervous for the dressage), before settling into a show jumping career with the then-rising star Hans Günter Winkler in 1951.

Halla had already won back-to-back World Championships when they competed at the 1956 Olympics in Stockholm. In the first round Winkler pulled a groin muscle after his mare took off early for a jump. Despite the pain, Winkler decided to continue riding, as the German team would be eliminated without him. Any drugs that could reduce the pain enough to make him comfortable in the saddle would also reduce his mental capacity, and therefore he was only given black coffee before his ride to try to help reduce his dizziness and double-vision. Halla sensed that her rider was not right and performed the entire course clear with only steering from Winkler. Their performance won them the individual and team gold.

Halla went on to win another team gold at the 1960 Olympics in Rome, after which she was retired. She produced eight foals, none of which were able to replicate their dam’s athleticism and heart. Halla died in 1979 at 34 years old.

Check out this video of Halla and Winkler’s winning round at the 1956 Olympic Games in Stockholm:

What a mare. Go Riding!