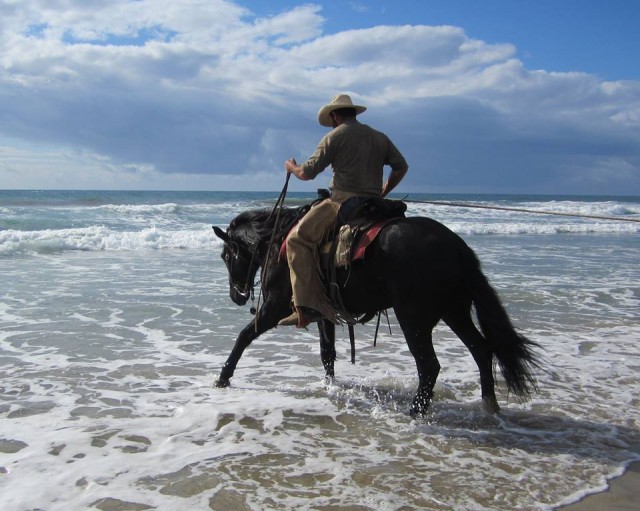 Matt Littrell, a Marine veteran and farrier by trade who has struggled with PTSD, just finished a cross-country horseback ride from North Carolina to California to raise money for the Semper Fi Fund.

Matt posted this on his Facebook page last January:

My name is Matt Littrell. I was an infantryman with Golf Company 2nd Battalion 5th Marines. I served in the Marine Corps from December 2001 — December 2005. I served 2 tours to Iraq during my enlistment. In April 2014 I am taking 2 mustangs and riding from Camp Lejeune, North Carolina, to Camp Pendleton, California. I will be using I-40 as a rough guide along my ride across the country. I am doing this to raise money for the Semper Fi Fund. The Semper Fi fund is an organization that provides assistance to wounded veterans who suffer from visible and invisible wounds suffered in combat. The need to help our veterans is great. Government funded organizations such as the VA are so backlogged and inadequately staffed that claims are taking too long to help our vets in time. I have witnessed too many of my own brothers die long after the shooting stopped to remain idle any longer. This is my mission; this is our Long Trail Home.

He talks about his struggle with post-service depression and suicidal thoughts in this interview:

Matt continued to update followers of the ride on Facebook, verging on poetic occasionally:

I’m lying here just a few miles west of Carlisle SC watching the lightning bugs and listening to the frogs. It’s natures symphony that puts our mind at ease. Beethoven could never write a melody to match this.

He made a lot of friends on the way…

…including a woman who would become his fiancée, Kristen Fuhrmann. Matt met her when he slept in her family’s barn in Alabama; she ended up joining him for the latter part of the ride.

Many times he was just a happy tourist and equestrian:

Georgia may be known for its peaches but holy cow that was some good strawberry pie! …Crow and Siren are starting to tolerate each other’s presence which is nice and takes a load off of my mind knowing they’re not going to kill each other in the night.

Plans changed, new horses were purchased, others were given long days of rest and trailered forward, but still Matt kept traveling the miles…

We are on our last highway before we hit the Pacific Ocean. I’m not sure what I thought I would be at the end of the ride and how it would affect me. I’m still a vet and I still think about the times when I walked the streets of Ramadi. I still think those were the best and worst days of my life. I believe I’ve made a couple steps towards the rest of my life but it took a whole lot more physical steps to get those couple. We are forever different and always will be. We will never not be someone who didn’t see and do what we had to. I guess we just learn to deal a little bit more every day and head down the trail and keep riding and every once in awhile we get somewhere in the right direction. The second we stop riding is when we become in danger of being one of the 22 a day (military suicides). All we can do is ride, ride and fight. So we press the fight and tomorrow we ride.

And then on November 30th, they were there…

We did it. It was a long ride but we did it. Crow carried me ocean to ocean. All I can say is thank you.

Matt is still a long way from his goal of $7,000,000. This holiday season remember our troops and donate to the Semper Fi Fund.