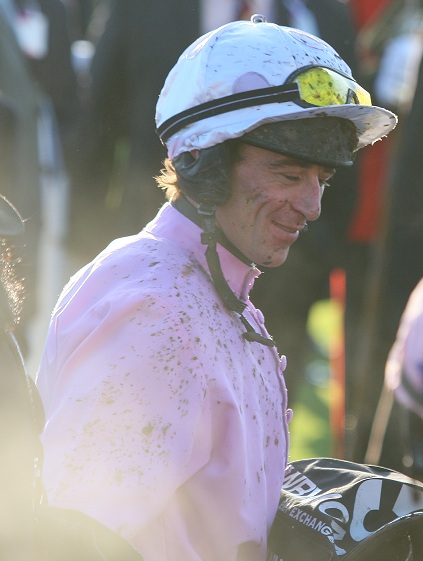 Steeplechase jockey Davy Russell didn’t mean to “borrow” Phillip Enright’s crop after he dropped his own early in the race. But when you’re approaching the homestretch and if your buddy has no chance of pulling ahead…well, you’ve gotta do what you’ve gotta do.

Because of this incident, both jockeys have been suspended for five days over a period including several races of the Leopardstown Christmas Festival in Dublin, which is a major event for Irish steeplechasing. To add insult to injury, the crop didn’t even help, as Russell’s mount (who started with  8-13 odds) ended eighth.

“I never set out to do this as it wasn’t premeditated,” Russell said. “The suspension has come as a bit of a shock. I’ve nothing more to say and will have to digest it.”

Up until this point, it has seemed like not much could slow Davy Russell’s racing career. From 1999-2002, he quickly rose through the ranks of amateur point-to-points and steeplechases in Ireland, and when an opportunity to go pro in England arose in 2002, he leapt for it (so to speak). Since then, barring the occasional injury, he’s had an extremely busy and successful racing career, and was named champion jockey two years in a row at Punchestown (2012 and 2013).

In any case, he’s got mad stickability:

There’s no doubt Russell will come back with a vengeance (and maybe a spare crop stuck in his boot) once his suspension is cleared.