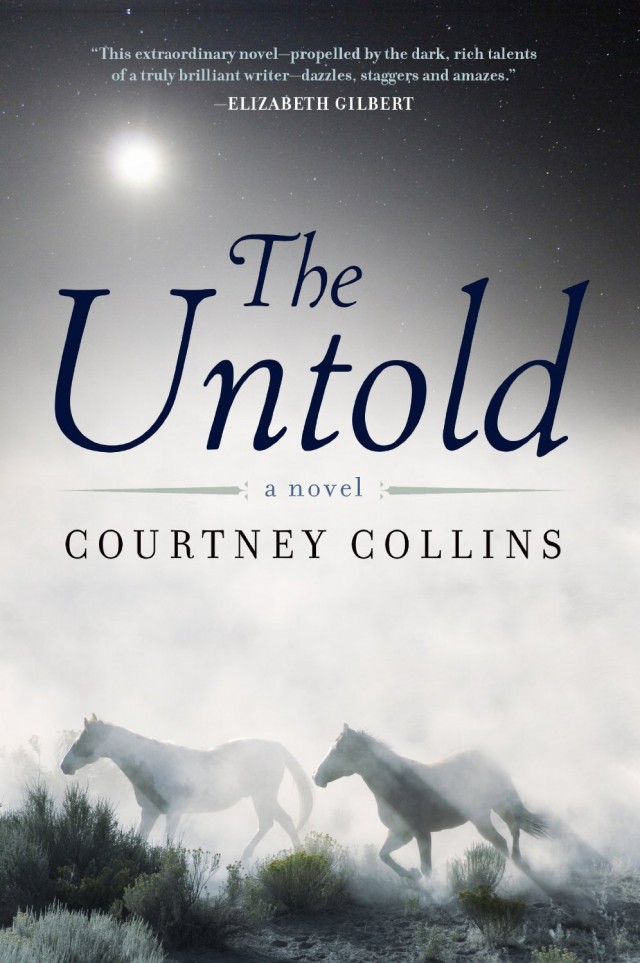 Erin McCabe reviews a new novel by Courtney Collins with an equestrian twist.

I knew I had to read The Untold by Courtney Collins the instant I heard about it. I mean, badass female-centered historical fiction with horses? That’s 100% in my wheelhouse.

Inspired by real-life trick rider, horse thief, and outlaw Jessie Hickman (I love her! You can see her mug shot here — along with Collins’ discussion of her writing process), the book imagines Jessie’s life during the time she was on the run, wanted for the murder of her cattle-rustling abusive husband, and hiding out in the Australian bush.

I’m going to state it plain: I thoroughly enjoyed this novel. After a false start (not the book’s fault), I devoured it in a matter of days (as in, two). It essentially reads like an American Western (and yes, Collins has been called a female Cormac McCarthy). The setting and characters still feel familiar — lonely outliers, sad cowboys, outlaws, fallen women, and misfits, riding through a harsh and beautiful countryside. It’s just that most of the plant and animal life in this particular wilderness are unfamiliar (what do “ribbon gum and brown barrel, hakea and grevillea” look like?). No matter — the writing is beautiful, the story intriguing. While I always felt a bit distant from Jessie (perhaps because of the vantage from which the story is told), I did feel enormous sympathy for her. In fact, each of the characters in this book are portrayed in a sympathetic light (except the abusive husband, obviously), even the lawman out to track Jessie down. And Jack Brown. Oh, Jack Brown.

Perhaps my favorite scenes in the entire novel (aside from the brilliant ending), are the moments Jessie spends with her horse Houdini. Twice, Jessie gives Houdini his freedom. Both times are moving (in completely different ways). I could easily imagine myself in Jessie’s boots, letting my horse go. Here’s a snippet of my favorite of the two scenes: “…she saw what she wished she would see. Houdini was in there among them, more ragged than she had last seen him, but still rearing up like any belligerent stallion. There was no way out for any of the horses. The branches were piled high and made sharp at the ends. Jumping would mean breaking their neck or their legs in the tangle of sticks. She couldn’t bear to see Houdini in there scraping around wild and fighting with the others. Keeping her head down, she let herself in through the thatched gate. Houdini saw her, made a path to her…” What follows might be pared down in language, but the details are rich, the actions are telling, and any HorseGirl will feel the emotional current running beneath the words and between Jessie and her horse.

There are some unusual choices in the way the story is told. The novel’s narration is attributed to Hickman’s dead baby which I found fascinating — to have an untold story recounted by a child whose life is unlived — but which some may find odd. However, after the novel’s rather shockingly fabulous opening about the baby’s death, the baby’s personality recedes so much that it essentially feels like an omniscient narrator. And while there are a couple moments that left me puzzled or didn’t seem to move the plot forward (the prologue and an interesting vignette when the narrator meets another soul buried nearby), the story itself impressed me with its steady build that includes a great plot twist (which in hindsight seems absolutely inevitable — the way a good plot twist ought to). Oh, and the amazing ending. I don’t think I’m really giving anything away here, but if you’re the kind of person who takes umbrage at those other kind of people who read the end first: possible SPOILER ALERT! (skip now to the next paragraph). I just have to say, I adored the way Jessie repeats the words “I am here” and the way those words evolve and change meaning. It’s a befitting, beautiful ending that encapsulates what character and the book are about, especially the way so many women in history have been covered up and erased — though, of course, the irony is that at the moment she asserts her present, Jessie is also actively making herself invisible, disappeared.

Bottom line? The characters in this novel may be odd ducks, but they feel human (except for Houdini, who feels all horse). They feel real. That’s the kind of book I like to cozy up with.