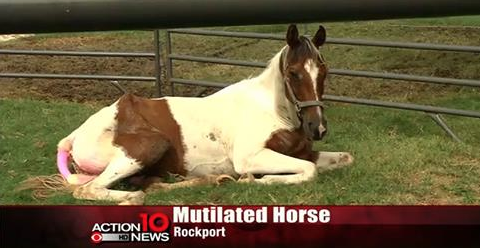 Two Texas men have been arrested and released on bail after fatally mutilating a 5-year-old mare in August, but rescuers want her story heard.

Note: This story contains graphic content not suitable for some readers.

On August 23, 2014, Rockport Horse Rescue (RHR) was called by the San Patricio County Sheriff’s office to pick up an injured mare described by the officer as “the most horrific case of animal cruelty that he had ever seen.”

The mare was cut from her anus to down in between her legs. All of her exterior genital parts were gone. She had extensive leg injuries as well.

Unbelievably, rescuers believe the mare survived for weeks after being mutilated, wandering in a nearby field. RHR took her to Dr. Sam Williams at Crossroads Veterinary Clinic in Victoria where rescuers spent 4 to 6 hours a day cleaning her and helping with evacuating feces when needed. She also underwent surgery to promote better healing and to allow for a normal urine stream.  Her leg injuries were x-rayed and showed no injured bones or joints, although doctors theorized the mare sustained nerve damage caused by the initial trauma which made it difficult for her to stand or walk.

Despite her rescuers valiant efforts, Yanaha passed away on October 11.

“Friday night John and I loaded up our three year old twins to make the trip to the Elgin Veterinary Hospital to see Yanaha. We arrived at 1 a.m. and visited with her. We went straight to her stall and for the first time she did not rise to greet us. She did not whinny or neigh, she looked at us with loving eyes, ears forward and listening intently to our words but still did not rise. Jack and Jackie spoke to her and Jackie was blowing her kisses but still she did not rise.

Holding back tears I was walking away from the stall holding hands with Jackie when she said ‘Mommy, Yanaha is sad.’ I knelt down and said ‘What honey, why do you say that?’ she replied, ‘Yanaha is sad because she wants to go home to our house.” Trying so hard to hold back tears, I said to her ‘Sweetie Yanaha is going to her new home, a better home. Remember that’s what Mommy and Daddy do, we fix the horses and make them better and find them new homes where they will live happy forever.’ She looked at me with tears rolling down my cheeks and reached up and gave me a kiss and wrapped her arms around my neck and it was then that I knew it wasn’t just her I was trying to comfort but myself as well. We were faced with the decision that is so hard to make for any animal lover.

With all the Vets, Surgeons and Neurologists consulting on her case there were simply no other treatment options. Yanaha’s condition was deteriorating and it was simply at the point that it was going to be inhumane to keep treating her with treatment that she was simply making no improvements with. Yet all the things the vets had said it was a three year old that made me understand that we were doing what needed to be done, it was our job to give her a forever home, a place where she is no longer in pain, no longer having to fight to survive. We have all been blessed with the presence of Yanaha, though we were supposed to be helping her it was we that gained so much. Yanaha united a community and has brought out the best in people and restored our faith in humanity. Though just before noon yesterday Yanaha was given peace and will no longer be with us her spirit is strong and will live on in all of us touched by her and her ability to Love, Trust and Forgive even after all she had been through.”

On November 19, two men were arrested and charged with cruelty to livestock animals.

RHR vows, “Yanaha… We promise we will not give up the fight to see that your abusers are held accountable.”