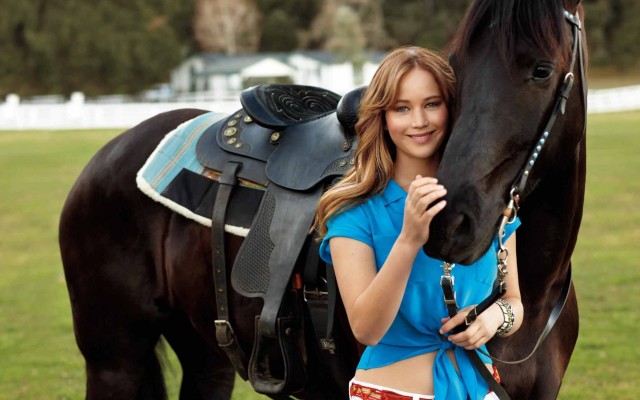 The 24-year-old “Hunger Games” star loves horses, grew up riding almost every day and still has a jacked-up tailbone from a fall. Here are five things you didn’t know about her equestrian past.

1. She grew up in Louisville, Ky., in the heart of horse country.

“Growing up, I lived 15 minutes away from a horse farm, and I went there almost every day… My brothers were into fishing, but I was all about the horses.” –People

2. She grew up riding and has the battle scars to prove it.

“My parents were cheap so they never bought trained horses. I have a deformed tailbone, actually, from being thrown off a horse.” –The Late Show with David Letterman

She discusses her equestrian past at length in this 2011 interview:

3. She has horseperson “quirks.”

“I love being around horses. I had two horses, Dan and Brumby, who hated each other and then were inseparable. I had a horse named Holly then Brandy. Her real name was Holly and then I called her Brandy for some reason.” —Seventeen

“Horses are a very important aspect of Camp Hi Ho. Since we are located on a horse farm, in the horse capital of the world, these beautiful animals are naturally part of our camp. Our campers learn basic horsemanship from brushing, bathing, grooming and of course, riding. We have indoor and outdoor riding facilities on our property, and kids are allowed to ride horses at all camp hours.” –Camp Hi Ho website

In Winter’s Bone Jennifer plays an impoverished teenager living in the Ozarks, a role for which she was nominated for Best Actress. Her character is clearly pained to give away the family horse, as they can no longer afford to feed it.

She also rides a horse in Serena, released in October, which stars Jennifer and Bradley Cooper as newlyweds running a timber business in 1930s North Carolina.

Maybe someday Jennifer’s guns-blazing acting career will slow down and she’ll get to reconnect with horses off the set. Go Jennifer, and Go Riding!