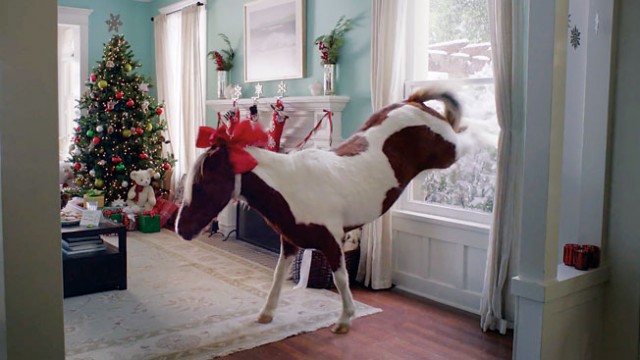 It may be Cyber Monday, but there are some things you just shouldn’t order online.

This 2012 eBay Christmas commercial is a Horse Nation holiday classic — and a reminder of why we shouldn’t hold it against Santa that he didn’t deliver that pony we begged for as a kid.

Fun fact: In an interview with Adweek, the commercial’s creative director Lee Einhorn explained that they used Shetland ponies for the spot. “They look really sweet, but they’re actually kind of mean,” he said. “We used three ponies that looked similar: One was a kicker, one was a spinner, one was a runner. We would swap them in to get the kinds of destruction we needed.” No worries, though — that pony isn’t actually putting its hind legs through a glass window. Trainers handled the ponies and the Humane Society was on hand to monitor them.

Need to do some holiday shopping? Time is running out to take advantage of SmartPak’s Black Friday/Cyber Monday sale.

So go ahead and knock out that Christmas shopping list for the horse lovers in your life. SmartPak offers one-stop shopping for apparel, gear and gifts. The only thing SmartPak doesn’t have in its catalog, really, are actual equines. Which isn’t a bad thing, necessarily…