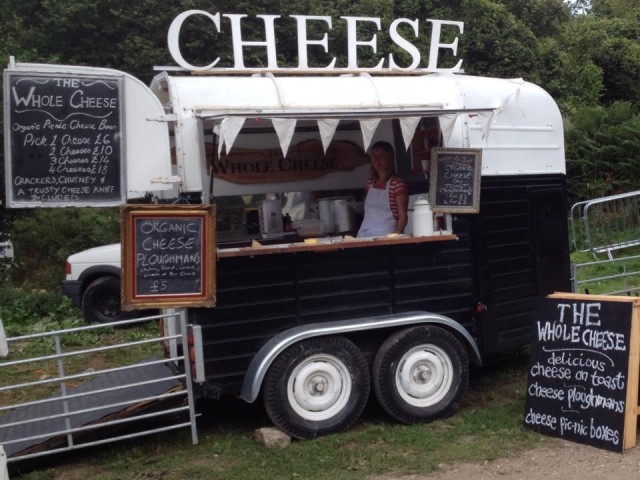 If one simply must turn a perfectly good (or bad) horse trailer into something else, a traveling wagon of pizza or beer is probably not the worst thing that ever happened.

In the modern era of bringing delicious portable food to the masses, a few scrappy souls have stopped and looked at a sad old horse trailer on Craigslist and thought, “I know what I could do with that!”

And let’s be honest. A good share of the 1960’s straight load trailers for sale online probably have no business pulling horses now, anyway.

This trailer conversion is hands down my favorite of the bunch. The curved wooden windows, the charming modern overhang roof, the cherry red paint, and of course, the copious caffeinated contents. I have no problem with this former horse trailer’s second life in the big city!

This lovely little trailer was converted into a community kitchen in England, and they made local and organic prepared food available in rural locations for an affordable price. Tragically, this gem was stolen out of its parking spot one night in 2011, and hasn’t been seen again. So if you’re ever in England and see someone picnicking in a charming blue converted horse trailer, call Scotland Yard!

This magical horse trailer looks unassuming enough from the outside, but on the inside, magical beer-flavored things are happening!

The Hop Box has a full draught beer bar inside, and provides craft beverages mostly out of microbreweries. Yet again, England is way ahead of us on this whole repurposed horse trailer thing. #getittogetheramerica

Now THIS is American. Tucked back behind the fold-out condiments shelf and between the double awnings, there is a 6 foot long BBQ smoker in that there trailer. Apparently, the manliest father in the world converted the horse trailer because the family are die-hard competitors in the Beeville County, Texas annual BBQ cook-off. In other words, because, Texas.

If the private BBQ make you jealous, never fear. Just swing up to visit our British Columbia friends to the north, and get your middle eastern BBQ on at Mangal Kiss. You’ll have to visit their Facebook page for the food pictures (totally worth a digital visit… prepare to drool) but check out the before and after of the trailer conversion!

If there were still room for a horse in this trailer, I am quite certain this would be every decent horsemen’s dream. Ponies and an unlimited supply of espresso. We somehow discovered this out of the dregs of an ancient Craigslist archives dating around 2008, but yes, at one time, you could have bought this very espresso trailer for yourself. If you were the lucky buyer, drop us a line and tell us between cups how life’s treating you.

Again. Britain. Stop with your winning at life. According to their website, “The Whole Cheese was founded in 2012 by a cheese maker who wanted to spread the good word of cheese by providing delicious cheese options at live events.”

HEY BURGHLEY AND BADMINTON, THIS THING HERE. MAKE THIS HAPPEN.

What’s funny about the name of this pizza company is that, I have totally had a dream just like this. If dreams had titles, the title of that dream was “Lorraine’s Most Perfect Day of Blue Ribbons and Wood Fired Pizza and Sunshine, Amen.” So… yeah. Ain’t no one complaining about a horse trailer being a pizza oven now.

A horse trailer with a giant plastic donut on it. Is this real life? I hope so.