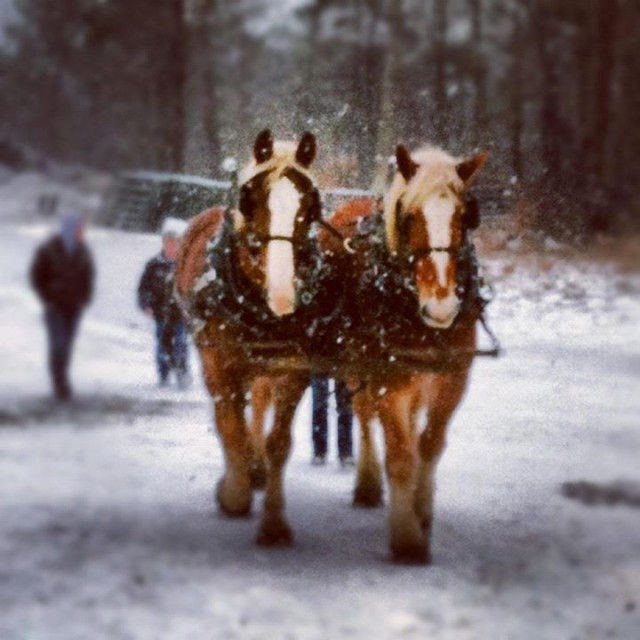 Who knew that being part of Santa’s entourage would be such an emotional roller coaster?

The opportunity sounded good: drive the horse-drawn wagon to deliver Santa to the town square for Black Friday’s grand tree-lighting ceremony after providing some wagon rides for the townsfolk. We’d make a little extra spending money for Christmas for our troubles, and it might even be sort of fun: I loved driving the team and I loved sharing the quiet grace and strength of the draft horses with the surrounding community. What I did not realize I was in for was a day of the highest highs and the lowest lows. Next time you see someone driving Santa about town, please, for the love of holiday cheer, slip that driver an adult beverage, because chances are they need it.

Hooray, it’s Santa! But wait, look at the driver:

That, my friends, is the face of a man who has learned the truth: hauling Santa is the hardest job a driver can take, anywhere, ever.

Black Friday a few years ago found us hauling our wagon and our horses a few towns over — we’ll call it Whoville to avoid embarrassing anyone. We had already put in about four hours of work to scrub our Belgians’ white socks, roll their manes, bun up their tails, polish the parade harness and pack wagon decorations into the trailer. We hooked the wagon to the back of one of the trucks to haul down (after the usual 20-minute search for the appropriate hitch pin). A light snow was sifting downwards as we rolled out of the barn, dusting the world like a Christmas cookie and transforming the most mundane scene into something magical.

Once we arrived at Whoville, we unloaded the boys in an empty parking lot according to our instructions. Kaitlyn quickly decorated the wagon as I put the finishing touch on the harnesses — two rich strings of deep-voiced bells that rang joyfully with every movement the geldings made. We hooked them up to the wagon, my border collie Sage leapt up to the driver’s bench, Kaitlyn and I quickly scrambled up after her, and away we went to bring Whoville its Christmas.

Two hours of wagon rides later, the incessant ringing of the bells was all I could hear. Kaitlyn and I had long given up on trying to have a conversation over the din of the bells mixed with the racket of traffic in busy downtown Whoville. Angry Black Friday shoppers sped around us at every opportunity, cursing us through their car windows for holding up traffic. Kaitlyn herself was fuming over a slight altercation with the festivities coordinator — we’ll call her Grace — when the woman continued to pack townsfolk into our wagon despite our firm 10-passenger-at-a-time weight limit. Our hands were frozen; our feet were numb; the dinner hour came and went with no offer of refreshment for us weary horse people. When Grace finally sighed and said it was time to go pick up Santa for the parade, we nearly wept with relief.

Santa and Mrs. Claus met us in the parking lot and climbed aboard; Grace followed suit and positioned herself right behind. Santa, a slightly grumpy older gentleman, didn’t seem too steady on his feet and clutched at the back of the driver’s bench a lot. Grace directed us out of the parking lot and towards the parade route as the sun set and the sky darkened. As we fell into line behind the Whoville High School Chorus, the firetruck just ahead of them fired up the lights and siren. Our blessed geldings didn’t even bat an eye.

As the parade turned down Main Street, Grace stood up in a low crouch so she could hiss directly into my ear. “Slow down! It’s a short parade, we have to make the most of it.” So I stopped the boys, who stood happily in the middle of the now-dark town. “Okay, go ahead.” I clucked to the boys and they leaned into their collars to take a step. “I SAID GO!” Grace shouted in my ear. I smiled politely and let the boys continue walking. Less than a block later, we were catching up to the chorus again. “Stop for a minute.” I tightened the lines and called “whoa” to the horses, who gathered themselves to sit down in their britches. “I SAID STOP!”

This pattern continued for two more blocks, until Kaitlyn grabbed my arm and pointed to the end of the street. I peered ahead on our parade route, the grand square where we were to deposit our increasingly grumpy Santa–he was having a hard time keeping his balance with all the stopping and starting that Grace insisted upon. Up ahead, the crowd was getting thicker and thicker, piling up onto the roadway itself until the way looked to be about as narrow as a doorway. How on earth was I going to drive my boys into that? Images of children mown over by my Belgians filled my mind, headlines in the Whoville town paper proclaiming “CHRISTMAS TRAGEDY AT THE HOOVES OF SANTA’S WAGON” and so on.

And yet the boys placidly marched on, blissfully oblivious to the mayhem of the frantic crowd as they began to scream for Santa. Our passageway grew narrower and narrower until the people were at an arm’s length from me in the driver’s seat. “TURN HERE!” Grace called into my ear, pointing to the left where the darkened Christmas tree awaited Santa’s magic about 50 feet away — 50 feet of one solid, massive crowd of people. OK, I thought to myself, there’s no way she actually means for me to turn here. I saw an opening a few feet ahead, where a helpful police officer was keeping a roadway clear. I clucked to the boys and pointed them ahead.

“WHAT ARE YOU DOING?” Grace shrieked. “STOP RIGHT NOW!” Sick to death of Grace’s backseat driving, I commanded the team to stop — just as Santa waved to the crowd with both arms. The big man in red went tumbling right to the floor of the wagon. Grace hastily helped him to his feet and he hurried off the wagon, muttering some very un-Santa-like language to me and my horses on the way out.

Kaitlyn and I made our getaway down the open side street, debating out loud the merits of just unhitching the horses right now, loading up and getting out of Whoville before Grace came back to rip us a new one — but, being filled with the spirit of Christmas and renewed faith and love in our completely unflappable team of horses, we rounded the block and returned to give another hour of wagon rides.

Grace, for whatever reason, didn’t show her face again that evening; she sent a lackey over to us exactly at 8 p.m. while Kaitlyn was busy arguing with people waiting on the sidewalk that wagon rides were done for the night–we had been at it for four hours and the horses were done in. The lackey handed me an envelope with our hard-earned cash inside and turned her face up to me on the wagon bench to eagerly inquire about “providing us with your wagon services again for next year?” I shared a long look with Kaitlyn, turned back down to Grace’s minion, and with all the holiday spirit I could muster politely refused. We clucked to the horses who stepped forward happily with an empty wagon and headed home into the night, bells ringing out with joy at the evening’s conclusion.