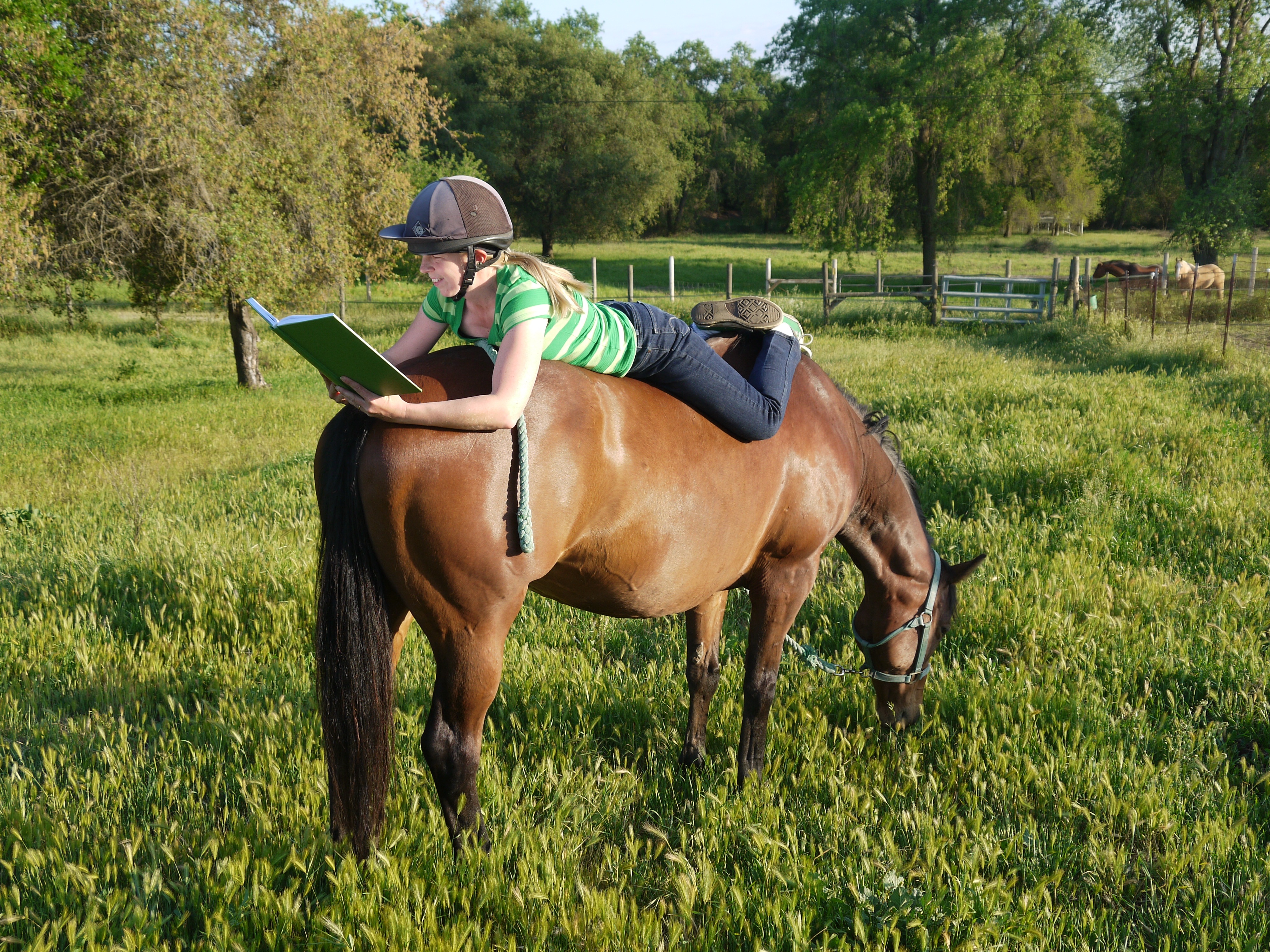 I have the same problem with books and horses — I want to read and ride and own far more than I actually can (or should). This Fall in my bookstore meanderings, I came across a whole herd of new horsey books I wanted to take home with me. So, just in time for your holiday gift-giving hint-dropping, here are five titles you might want to corral—just be sure to conduct your own pre-purchase exam, as I haven’t taken any of these for a real test ride.

“Falling From Horses” by Molly Gloss

If Horse Nation had a book club (!), this one would be my pick. I was so excited to discover this new release from one of my favorite authors. I adored Gloss’ The Jump Off Creek and her most recent release The Hearts of Horses made me cry. This novel takes Bud from his family’s Oregon ranch to 1930s Hollywood, where he meets a daring young lady writer, Lily, and tries to become a movie stunt rider, as an attempt to escape guilt over his sister’s death. My understanding is that Gloss doesn’t sugarcoat the abuse and injuries (to both riders and horses) inherent in many of the movie stunts, but from her previous work and because Gloss is a horsewoman herself, I’m expecting her signature plain-spoken wisdom and observations to ease the pain of the truth. As an added bonus, Falling From Horses includes some of the characters from The Hearts of Horses, but 20 years later. This is one book I can’t wait to read.

“The Fortune Hunter” by Daisy Goodwin

I can’t tell you how many times this historical novel caught my eye before I realized the woman on the lovely cover is wearing a riding habit. The story is about Sisi, the Empress of Austria, who is an accomplished equestrienne and travels to England to escape her boring husband and join the hunt, based on the life of the real Empress of Austria (what?? How did I not know about her?). Sisi’s companion on the hunt is cavalry officer Captain Bay Middleton (a man whose name is a horse color?? Yes please!) who is billed as the only man who can outride her. Of course sparks (and horses?) fly. The story is billed as dramatic and passionate, with many hunt scenes. Plus, the Grand National figures in the plot so there should be plenty of horse action in addition to romance. That said, I did flip through the pages to find a horsey scene and was a bit dismayed to discover a description of a horse lamed by a puffy, red frog. Hmmm…

This novel is advertised as having a Western style reminiscent of Cormac McCarthy (All The Pretty Horses) and Annie Proulx (Brokeback Mountain). Set in 1950s Montana, the novel follows Catherine Lemay as she comes to complete an archeological survey in advance of a dam project. Her assignment is to confirm that nothing of value will be lost when the canyon (part of which is on the Crow reservation) is flooded. Set loose basically alone, Catherine meets John, ex-cavalry soldier and mustang-horse-whisperer. Based on the first horse scene I managed to find during my bookstore page scan, (a man beating a panicking horse in a trailer with a pipe) my sense is that, like McCarthy’s work, this novel is a bit dark. However, the next scene I found was a beautiful observation of a wild horse herd (seen through John binoculars as he selects which horse he wants to round up). This is a new author I’m looking forward to trying, so I’ll definitely be picking this one up.

“The Longest Ride” by Nicholas Sparks

I have yet to read a book by Nicholas Sparks, though I enjoyed the movie version of The Notebook (or maybe I just enjoyed Ryan Gosling?), which my husband calls “a satisfying trip in an emotional washing machine.” This new romance features 91-year old Ira reliving his marriage to Ruth, now dead for nine years, as he awaits help after a car accident. Meanwhile, at a nearby rodeo, college senior art-history major Sophia meets 19-year-old bull-rider Luke and begins to fall in love with him (opposites attract?). Somehow these two stories eventually intertwine. Now, I guess bull-riding isn’t horse-riding, but a horse is on the cover, and don’t most bull-riders ride horses too? No? I have no idea. Still, if cowboys and romances are your thing, this book seems likely to be another tear-jerking romance (and word on the street is that Sparks doesn’t always write happily-ever-after endings to his romances. You’ve been forewarned.)

I was surprised to discover this work of non-fiction was about a Mongolian mare who served carrying ammunition across a minefield during the Korean War, earning two Purple Hearts. I had no idea horses had been involved in military conflicts as late as the 1950s. Well, enter Reckless to completely dispel that notion. For lovers of horse-y non-fiction and/or military history, this is a real gem. What I’m saying here is that if there is a man in your life who needs some Horse IndoctriNation, this book might fit the bill (and then you can steal it and read it yourself). Based on interviews Hutton conducted with the Marines who served with Reckless, the book is a thorough accounting of her service and the devotion her soldiers had for her. It also includes plenty of pictures of Reckless in action — both doing her duty on the battlefield, hanging out with her soldiers, and romping with her foal. It looks like a very heartwarming and inspiring story, if the pictures of her retirement ceremony are any indicator and the fact that she lived out her days and is buried at Camp Pendleton.

And there you have it, folks! Five fresh Fall books you might want to curl up with when the weather gets too cold to Go Riding!