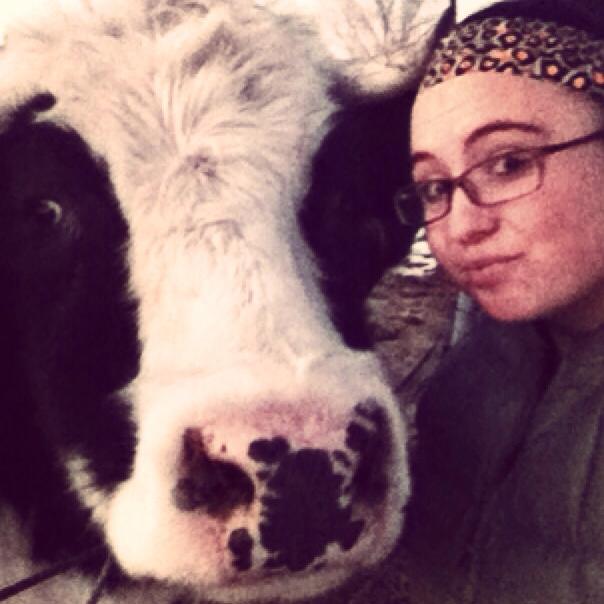 Moo-ve over, horses. I think I’m in love.

When reader TeaLa Mears sent Horse Nation this video of her 3-year-old Holstein steer Romeo jumping, we had to know more.

TeaLa explains, “I got Romeo for my 18th birthday. I drove to a dairy in Olathe, Colorado, and was going to get a heifer but they would only sale me a bull so I got Romeo. He was a day old and had to be bottle-fed. I stayed outside with him the first three nights after I got him and I bottle-fed him three times a day the first month, twice with milk and the other time with just water.”

Awww! In addition to Romeo, TeaLa has three paints, two quarter horses, a mini horse and a micro pig. Not having a bovine role model, Romeo looked to the other animals for cues about how to behave. That’s how the jumping started.

“I was out playing with my mini horse, having her jump a small rail, and I decided to see if Rome would follow me over it,” TeaLa says. “I grabbed his bottle and he jumped right over it! If I leave it set up, you’ll see him outside randomly jumping.”

So, is TeaLa grooming Romeo to be the next Luna the Jumping Cow?

Maybe not. “I have tried doing it while riding it but he just walks over it and won’t jump,” TeaLa says.

A few more reasons why we just can’t get enough Romeo:

He is a master of the selfie.

He has more personality than some people do.

He will let you ride him.

He will pull you on a sled.

He’ll do anything for a piece of watermelon.

And of course, he has his own Facebook page.