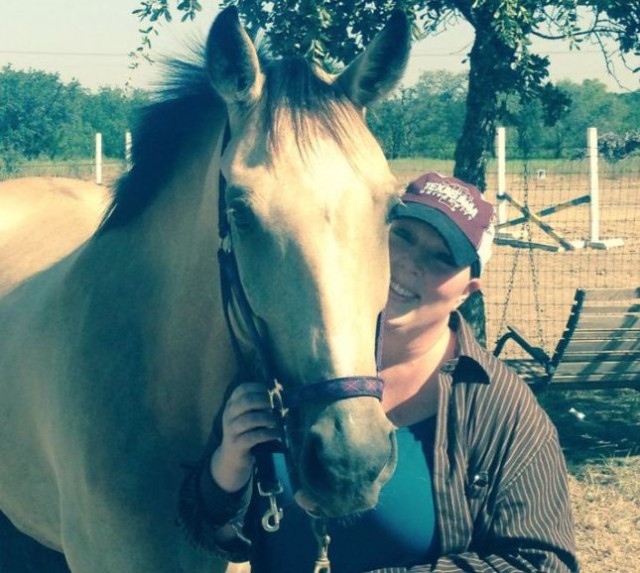 One of the greatest things about the equestrian community is our willingness to help each other on the bad days. Texas eventer Natalie Kelly isn’t a charity case; she is a fellow rider in need.

My story should be considered a tragic comedy! What started in September 2013 as a simple ankle surgery, turned in to a four-month recovery through both a MRSA and MSSA major infection that required a central line in my chest and IV antibiotics four times a day. Then one night I noticed a lump that led my Infectious Disease doctor to believe I had mastitis in my breast. After several rounds of antibiotics, I decided to get a second opinion and follow up with my OB-GYN who confirmed that it was not mastitis. I was sent for an ultrasound and a mammogram. With the results in hand, I was referred to MD Anderson, the best cancer treatment center in the Midwest. I was devastated. I’m only 35.

I was diagnosed with Stage II Invasive Ductal Carcinoma that turned out to be genetic. So instead of doing a small lumpectomy, I was told I’d have to have both breasts removed. I went in for the first procedure, a simple surgery to place an access port under the skin to make giving IV’s and medication easier. A week after the port was placed I developed pneumonia and threw a blood clot into my jugular. I now have to take Coumadin, which limits both my activities and my diet. No activities that might cause bruising or trauma. The Coumadin was one of the main reasons I had to send Jade away.

Now because of the blood clot, I have to have my ovaries removed. I started chemotherapy in April and finished in September 2014. I had the first breast removed on October 22. I have to start radiation the week following Thanksgiving. I will be in radiation for a minimum of 5-6 weeks, every day except the weekend. Following radiation, I will have my left breast removed right around Valentine’s Day. From there, I will receive reconstruction in about a year and a half. I’ve lost my hair; I have neuropathy in my hands and feet.

I lost my job through this process and fortunately purchased private insurance, but I knew this was going to hurt us financially. I sold my new young, up and coming 4-year-old horse and made as many cuts as I could.

I was able to keep my heart horse. He’s a 6-year-old Georgian Grande named Jade that I’ve raised from a yearling. I’ve done all his initial training myself. I started him under saddle and even started his training over fences. He was the one thing I couldn’t let go. My wonderful husband knew how much Jade meant to me and agreed to help me keep him.

I got extremely lucky. The trainer that helped her student purchase my other horse stayed in contact with me through Facebook. I contacted her (Samantha Bogan of Holland Equestrian Farm) and asked her about a free lease option. She came back with a better solution. Samantha and her mother, Brigitta, agreed among themselves to take Jade into their training program under full board and care at a reduced price that I couldn’t pass up. Samantha has trained under Buck Davidson, Capt. Mark Phillips and Stuart Black. She has done wonders for my horse! In the short time she’s had him, he’s advanced from tadpoles to beginner novice and now to novice! He’s become so elegant in the dressage ring, confident in stadium and he absolutely thrives on the cross-country course.

His first show was at Pine Hill, a tough course for a beginner, but he stayed tied in first through dressage and stadium. A slight refusal at the water jump put us in a fourth place finish — which I was super proud of! His next show was at Greenwood Farm, and even though he was cold and it was wet and rainy, he took a second place finish. He’s been schooling at Training level now and should be showing at Training level in the spring. Our plan is for me to come re-learn how to ride him and intern for Holland Farms. I’ll work for Samantha in exchange for lessons so that I can start competing!

I miss working, I miss riding my beautiful horse and I miss not feeling like just a burden on my family. Our family has been wonderful and supportive — but I still need help. My dream is to beat this cancer and get back in the saddle so I can fly over those fences!