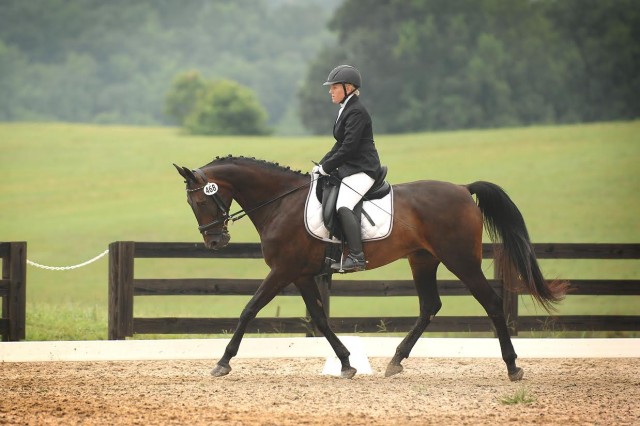 After ruling out Regumate and uterine implants, Amanda Moretz decided to have her “marish” mare, Gracie, spayed. Five years later Gracie is happy and pain-free, and they’ve never looked back since.

Looking back, the biggest decision I have made in my time with horses also brings up the most questions from new people I encounter. Not to mention some funny looks. I mean, what does the average horse owner do when someone tells them they have had their mare spayed?

Here is the story of Gracie in a nutshell. She is a thoroughbred cross who started life as a nurse mare foal rescue out of Kentucky, but was adopted into a wonderful home and raised in a loving setting. Around the age of four, Gracie started to act out under saddle — not moving forward, cow-kicking, crow-hopping and anything else she could do NOT to work. Many thought it was a behavior issue and no one wanted to ride her. So I, being the sucker, got the “free” horse. Thankfully for Gracie I was a licensed vet tech and dove straight into finding the root of her problems. While ultimately it was EPM causing the issues, her heat cycle made things even worse as she was in a large amount of pain most of the time.

To be sure, halting her estrous cycle would relieve her pain. First, my veterinarians and I decided to try to insert a marble into her uterus. It is a fairly common practice that “tricks” the mare’s body into thinking that it’s pregnant and can have good results. Gracie was cycle-free for about three months and really seemed to have decided that working wasn’t so bad. But eventually her body realized the marble was not a baby and rejected it out into her stall (which was a funny sight for the one cleaning her stall!) All in all, the test was a success. But I decided that replacing the marble every time she lost it was too much to ask her to go through. On to step two….

The other option I had, and it’s one that many mare owners choose, is Regumate. I did this for about a month before deciding that enough was enough. I couldn’t touch the stuff, the girl who feed the horses at night couldn’t either, and I hated to ask anyone else to do it as it can mess with just about anyone’s hormones. While it did do the trick, the hassle of asking someone to put their own health at risk on a daily basis for the rest of Gracie’s performance career seemed a bit much. So it was back to the drawing board.

Thankfully for me, I worked with some great vets at the University of Tennessee Veterinary Teaching Hospital. Dr. Prado, the reproduction specialist who had been seeing Gracie throughout this long ordeal, had another idea. He felt the best option for me, those who worked with Gracie, and Gracie herself, was to spay her. While she is a very lovely, well put-together horse, she has no papers so is not at all registered. Therefore I had no intentions of ever breeding her in the future. After learning about the spay procedure, I agreed with Dr. Prado and we set up the date of the surgery.

A good number of the people who find out Gracie was spayed are under the impression that it’s a difficult and complicated surgery. They are surprised to find out that not only was the procedure done standing with only an epidural and sedation, but also that she was back to work in a month. Right now there are two ways to go about spaying a mare and both are standing surgeries with quick recovery times. The method I chose for Gracie was a colpotomy, which is done via an incision into the vaginal wall to reach and remove the ovaries. The other option is a laparoscopic incision in the flank to remove the ovaries. With the surgery I picked Gracie did have to stay in the clinic for about four days; the same holds true for the other method as well. As part of her recovery, she had to stay standing for that time in the clinic to ensure that the intestines did not try to exit the incisions made in the vaginal wall. If the mare lays down, it adds extra pressure to the abdomen.

Once home Gracie did great, and went back out on turnout the same day. After a month of vacation and recovery she was back under saddle, and I slowly brought her back into work. I noticed a big difference in her attitude, pain level, and overall happiness immediately. I was very pleased with how things went and have since told my tale whenever I can to help others dealing with the same concerns. I know spaying is not for everyone and not for every mare, but it is nice having the information to think on.

Sadly for Gracie the spay was not the end of her medical woes… later that year she was diagnosed with EPM. But that battle was also won, and five years after both the spay and EPM treatment she is a happy dressage horse who is kicking butt working on Second Level movements. I think I can safely say for both of us that she (and I) are happy that heat cycles are a thing of the past, and we both know what to expect each day we ride out together.

About Amanda: The obsession with horses started young for Amanda, and she has never looked back since starting to ride at age 6.  Amanda attended St. Petersburg College in Florida where she completed her AS in Veterinary Technology, and then got her license to practice as a Lic. Vet Tech.  or over 12 years Amanda has worked in both small and large animal practices, and much of that time was spent in critical care/emergency, oncology, and equine internal medicine. It was in her tech work that Amanda saw the benefits of alternative therapies, and received her certification in Equine Muscle/Massage Therapy from Mike Scott in South Carolina.  Life now is filled with seeing her horse massage clients, attending human massage school, and riding her thoroughbred mare Gracie. For more information or to contact Amanda please visit her website www.amandastarrbodywork.com.