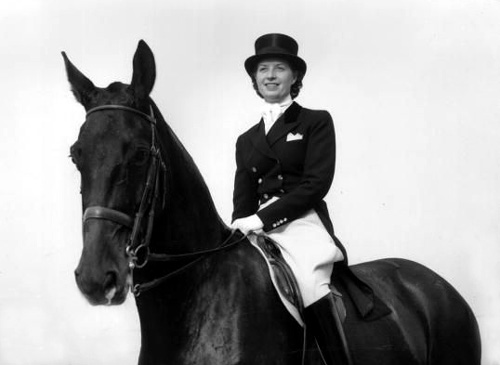 Lorraine Jackson recounts the life of a woman who not only helped break the gender barrier of Olympic-level equestrian sport, but did so while completely paralyzed from the knee down.

Her name is Lis Hartel. She was not only the first woman to ride for an Olympic Equestrian Team, but also the first female medalist, and the first Olympic level equestrian to medal despite a major physical disability. Her career makes her a hero to horse lovers, women and equine therapy advocates alike. Not to mention anyone who loves a good tear-jerker.

Born on March 14, 1921 in Hellerup, Denmark, Lis was just a normal horse-loving girl who grew up riding alongside her sister under her mother’s watchful loving eye. She began in dressage, her first and last love, but as a teenager also competed in show jumping. She married at 20 to a fellow horse lover, and was pregnant with her second child at 23 when tragedy struck in the insidious form of polio. Initially, she was almost entirely paralyzed, but with the help of her mother and husband, she decided to immediately begin her rehabilitation process to ride again. After delivering a healthy baby she started learning to lift her arms again, learned to crawl, and finally to walk with the help of arm crutches.

Determined to get back to competitive dressage riding, Lis decided to pick up where she left off and rehabilitated on her Olympic prospect and longtime family mare, Jubilee, a Thoroughbred/Oldenberg cross. she suffered several dramatic falls even at the walk and trot as she learned to balance and cue with little or no muscle control. But only three years after her initial illness, Lis competed at the Scandinavian Riding Championships in 1947 and finished in second place. At the time, no one on the international scene was aware of Lis’s condition, and it was Jubilee’s first foreign test. While her scores that year would have qualified her to compete in the Olympics, it was not her disability or her skill that prevented her from competing in the 1948 Olympic Games: women were still not allowed. It would be another four years before the gender bar was lifted and Lis would represent Denmark in the 1952 Helsinki Olympics.

A groom helps Lis onto her horse

While Lis was not able to mount and dismount Jubilee without the aid of her husband (she remained completely paralyzed from the knee down the rest of her life) she managed to clinch the Olympic silver medal, the first woman ever to do so and in the first year *women were allowed. In one of sport’s finest hours, the gold medal winner, Henri Saint Cyr of Sweden, carried Lis from her horse to the Olympic podium, and it was said to be one of the most emotional moments in Olympic History.

Lis on the 1952 Olympic podium

Lis would go on to win another silver medal in the 1956 Olympics in Stockholm, the Gold in the unofficial World Championships of 1954, and was a seven time Danish National Champion. She was inducted into numerous sporting halls of fame and considered a national hero in Denmark, but Lis always said she considered her greatest accomplishment to be opening the first Therapeutic Riding Center in Europe. Her advocacy of riding for people with disabilities was one of the major forces for making therapeutic riding an accepted rehabilitation, and she was a key spokesperson for the Polio Foundation.

Lis passed away in 2009 at the age of 87 after 75 years of riding and coaching. Lis fought innumerable odds to ride again, to compete again, and to create new standards for her sport and her passion. She embodies the message of the Olympics, and truly, it is stories like hers that make the Olympics an insatiable element of our collective human experience.

Lis with Jubilee and her daughter